Back with some Blind Guardian 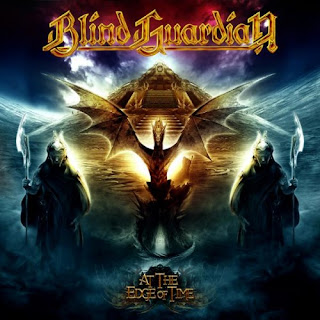 Whew, it's been a long week-plus.

I just returned from a business trip to Orlando. Prior to that I was banging out yet another high school football story for a local newspaper (yes, it's fall again). As a result, my blogging has suffered.

Still, there's one bright spot to report: I've since picked up the latest Blind Guardian album, At the Edge of Time, and actually found some time to listen. So far I like what I've heard. Not their best, but there's some good, strong songs on here. Better yet, I'm going to see Blind Guardian live for the first time this November 21!

Anyways, you can pop on over to Black Gate to read the rest. For regular readers I apologize in advance; the post is half recycled material, but my thoughts on At the Edge of Time start about halfway down.
Posted by Brian Murphy at 9:12 PM 9 comments:

So in the end, Robert E. Howard was a racist. When my kids are old enough, I will not recommend his fiction to them. I'll also explain how Howard was so racist he would have thought of my sons as less than human. I'll then suggest they read Howard's fiction and history to discover for themselves how racist the man was.

From "Robert E. Howard was a racist. Deal with it," by Jason Sanford. Read the rest here (at your own risk).

And once you're done reading, hop on over to Al Harron's bit of cyberspace, The Blog that Time Forgot, and read his well thought-out response. Nice work, Al.

Like Harron, I also find Sanford's post highly unfair. Yes, Howard was racist by our modern, 21st century standards. "The Vale of Lost Women" was not his finest hour. Yet not only was Howard's racism no more than average for his place and time (1920s and 30's Texas), but he grew progressively less racist over the course of his writing career. How does one reconcile these words from a Howard poem with someone who is, as Stanford proclaims, an irredeemable racist?

That I lived to a straight and simple creed
The whole of my worldly span,
And white or black or yellow,
I dealt Foursquare with my fellow man.

Lest we forget, Howard was a very young man (18 years old) when his writing career began. The mainstream stories in which Howard's racism is most prevalent and troubling are his early Solomon Kane tales; by the later Kane stories Howard had largely changed his tune. He was maturing not only as a writer, but as a human being. Alas, he was dead by 30. We'll never know what enlightened attitudes toward race he may have held into middle and old age, but it's clear what trajectory his beliefs were taking.

But even more than the broad brush Sanford uses to inaccurately paint Howard, I'm more concerned with his casual references to tossing aside literature that doesn't meet with his 21st century standards of decency:

This cultural "passing on" is where Howard's writings embrace true failure. Despite what Howard's defenders may wish, we do not read his stories as if we were back in the 1930s. We read them through the eyes of our 21st century beliefs. Not only was his racism disturbing to some of his contemporaries, it is equally disturbing to modern readers. Because of this, many people don't believe Howard's stories are worth passing on to others.

I find it hard to believe that a reasonably intelligent reader cannot place works into the context of the times and culture in which they were written. Books should be evaluated on their own terms, regardless of the author's beliefs. Jack London was a racist, as was H.P. Lovecraft, Nathaniel Hawthorne, and Joseph Conrad. Are we supposed to toss The Scarlet Letter and The Heart of Darkness by the wayside, then? Are these not worth passing on to later generations?

Extending Sanford's argument to an even greater height of absurdity: Sir Thomas Malory was a scoundrel. One biography declared him a thief, bandit, kidnapper, and rapist, and it's believed that he started Le Morte d'Arthur while he was in prison. Do the sordid details of its author's life render it any less a work of art? (Now that I'm on the subject, Le Morte d'Arthur is also thoroughly medieval and emphasizes the importance of Christianity as a moral code for lawless knights. Since many find religion and the medieval mindset repellant, that's three strikes. Please place all copies into the nearest incinerator).

Sanford does perform some equivocating in his post; he says that not all of Howard's writings should be discarded, and he's rather complementary of most of his Conan material. Unfortunately, this point is lost amidst his screaming bold-emphasized declaration that "the bastard was a racist!"

That Robert E. Howard was racist by our own 21st century standards is a reasonable argument and a basis for measured criticism.

That Howard's racism informs and mars all his works, and to therefore conclude that they be placed in the dustbin of history, is shortsighted and dangerous (or at the least, certainly troubling) thinking.

Not only is Sanford's essay a shoddy piece of work, but now he's apparently deleting critical comments about it left on his blog. I posted two pieces of evidence directly contradicting his thesis that Howard's racism was excessive and abnormal for his place and time, and I took them from the two official biographies of REH (one of which, Blood and Thunder, Sanford supposedly read). They are as follows:

If a racist, Robert Howard was, by the standards of his time and place, a comparatively mild one.

It is incredibly naive to throw a twenty-first-century value judgment onto people who were living a hundred years ago. For every instance of racism found in Howard's work, a compelling counterargument can be found elsewhere.

The two biographies of Robert E. Howard vs. Jason Sanford--I think we know where the truth lies, here.
Posted by Brian Murphy at 7:32 PM 40 comments:

Finding Deliverance in a dearth of heroic fantasy 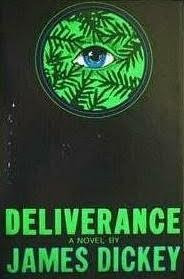 I lay with the flashlight still in one hand, and tried to shape the day. The river ran through it, but before we got back into the current other things were possible. What I thought about mainly was that I was in a place where none—or almost none—of my daily ways of living my life would work; there was not habit I could call on. Is this freedom? I wondered.

So you’ve read yourself out of Robert E. Howard and Fritz Leiber, closed the cover on the latest Bernard Cornwell and Joe Abercrombie, and you’re looking for something new in heroic fiction. But you can’t seem to find what you’re looking for. Rather than slumming around in the dregs of the genre or reaching for The Sword of Shannara (with apologies to fans of Terry Brooks), my suggestion is to take a look at modern realistic adventure fiction and non-fiction.

I read heroic fiction for the action, the adventure, the storytelling, and the sense of palpable danger that real life (typically) doesn’t provide. Likewise, I find that works like The Call of the Wild and The Sea Wolf by Jack London, Alive by Piers Paul Read, and Into Thin Air by Jon Krakauer satisfy the same primal needs as the stories of an Edgar Rice Burroughs or David Gemmell. The best modern adventure fiction/non-fiction stories are bedfellows with heroic fiction: While they may not contain magic or monstrous beasts, they allow us to experience savagery and survival in the wild and walk the line of life and death.

My favorite work in this genre is Deliverance by James Dickey, and it’s to this book that I’d like to devote the remainder of this post.

To read the rest of this post, visit The Black Gate website .
Posted by Brian Murphy at 11:41 PM 8 comments:

Typically I stay away from engaging in debate on sites like Youtube, knowing the caliber of response I'm likely to get. But in this case I just couldn't resist (I'm Rutgerhauer 666, still waiting for a response in the comments section that won't be coming any time soon).

Someone asked me once why I've taken up the crusade against Epic Pooh and other anti-Tolkien essays. "Why would you waste your time on something 30 years old?" The reason is simple: People still believe this crap. Epic Pooh has been cited approvingly by the likes of China Mieville and used as a basis of misguided criticism of Tolkien. And it still is today. But because Michael Moorcock wrote it, it must be true, right?

In fact, Epic Pooh is a shallow, surface-level ad hominem attack on a far more subtle and complex work than its detractors realize. It's a political screed and fails to engage the text of The Lord of the Rings or any of Tolkien's works on a meaningful level.

It comes down to this: You can choose to believe the unfounded opinion of essays like Epic Pooh, or you can examine the facts in Tolkien's stories. When I see it held up as evidence of Tolkien's faults on Youtube or Amazon.com or elsewhere--or when I'm feeling the need to blow off some steam in a futile and meaningless crusade for truth--I'm going to set the facts straight.

The Lord of the Rings ignores death and forces a happy ending upon us? Really, Michael?

(Note that Moorcock doesn't actually discuss Epic Pooh in this clip, it just comes up in the comments section).
Posted by Brian Murphy at 7:59 PM 30 comments:

Email ThisBlogThis!Share to TwitterShare to FacebookShare to Pinterest
Labels: Tolkien

In the grip of “The Northern Thing:” My top 10 northern inspired stories 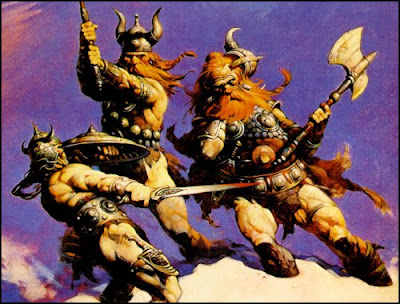 Let us die in the doing of deeds for his sake;
let fright itself run afraid from our shouts;
let weapons measure the warrior’s worth.
Though life is lost, one thing will outlive us:memory sinks not beneath the mould.
Till the Weird of the World stands unforgotten,high under heaven, the hero’s name.


If I had to choose a favorite sub-genre of fantasy literature it would be those writings showing the clear influence of ancient Northern mythology. Fantasy critic Lin Carter once described a group of writers including the likes of J.R.R. Tolkien, Poul Anderson, and William Morris as being possessed by “The Northern Thing”; I too am firmly in that Icelandic grip of iron. There’s just something about tales of pagan heroes possessed of grim northern courage, set against a backdrop of bleak fjords and smoldering mountain peaks and gray lowering skies, that make me want to hop on the nearest dragon-headed longship and go a-viking.

Following in no particular order are my top 10 favorite northern stories. These are stories inspired by northern myth (the Prose and Poetic Eddas), legend (the Icelandic Sagas), or history (the Danish invasions of England), and sometimes all three at once.

To read the rest of this post, visit The Black Gate website.
Posted by Brian Murphy at 10:29 PM 11 comments: