Conan Meets the Academy: Multidisciplinary Essays on the Enduring Barbarian: A review 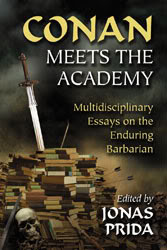 Conan Meets the Academy: Multidisciplinary Essays on the Enduring Barbarian (McFarland and Company, Inc., Publishers, 2013) offers a broad selection of essays on Conan, but not just the Conan of Robert E. Howard’s stories. It covers Conan in all his various forms, from the original Weird Tales barbarian, to the hulking brute of the Schwarzenegger film, to the various computer generated avatars in the Age of Conan computer game. In this way it differs greatly from its predecessors The Dark Barbarian and The Barbaric Triumph, which reserve their analysis for Howard and Howard’s stories alone.

This book will, I suspect, set many Howard fans’ teeth on edge. It opens with an unapologetic defense of the L. Sprague de Camp/Lin Carter-edited Lancer/Ace Conan paperbacks, positing that without these books Conan and Robert E. Howard would be all but forgotten today. Writes editor Jonas Prida, “The problem of de Camp’s decision to re-order the chronology and list himself on Tales of Conan’s cover as one of the authors has been alluded to, but what must also be admitted is that without the controlling hand of de Camp, both Conan and Howard may have gone the way of Kull, relegated to footnote status in investigations into fellow Weird Tales’ contributor H.P. Lovecraft.” Now I personally have no issue with placing the DeCamp/Carter pastiches, or even the Conan films and videogames, under the academic microscope; far from it, I think it’s an interesting and worthy exercise. However Prida seems to think that the root of De Camp-ian resentment is purists defending the Conan canon, but I disagree: What draws the ire of many Howard fans is De Camp’s often mean-spirited assessment of Howard the man in these books’ introductions and elsewhere.

In addition, Conan Meets the Academy: Multidisciplinary Essays on the Enduring Barbarian trumpets itself as a trailblazer in what Prida describes as a limited field of traditional literary analysis (“The first scholarly investigation of Conan,” according to a blurb on the back cover). Though it tips a cap to Mark Finn’s Blood and Thunder and Glenn Lord’s The Last Celt, Prida has apparently either not heard of The Dark Barbarian and The Barbaric Triumph or does not consider them "scholarly," as these fail to garner a mention in the preface.

Ah well, some troubling early signs aside, on to the contents.

Philip Pullman is another notable fantasy author who, alongside the likes of Michael Moorcock and Richard Morgan, has grossly missed the mark in his appraisal of The Lord of the Rings. Listening to this recent Geeks Guide to the Galaxy podcast I was dumbfounded not only by Pullman’s ignorance of The Lord of the Rings, but the gall he exhibits throwing around opinions on a work he admittedly read only once—and as a teenager. “I’ve tried to read it since, but I was unsuccessful,” says in the interview (note: the Tolkien portion starts around the 17:10 mark; its only a two minute segment or so of the interview). Admitting this fact should automatically invalidate any opinions you have on The Lord of the Rings. I was forced to read Moby Dick in high school. Had that been the only time I read it, and 40 years passed, how much would my opinions on the book matter? None, right?

But since is a big-time successful author, in the eyes of some we must take him seriously. So I’m taking this opportunity on what would be Tolkien’s 121st birthday to show just much how much he gets wrong.