Today's Metal Friday is not really metal... but close enough, and IDGAF. It's Rush, and they get to call the shots.

This choice is drenched in nostalgia. I'm a big Rush fan, and my first concert experience with them was the Presto tour. I'm old enough to remember them looking and sounding like this. Still have the t-shirt too, although were I to put it on it would look like someone spray-painted it on my body.

How's this for old school--I bought Presto (the tape) from a Columbia House deal--buy 12 tapes for a penny, then cancel, and chuckle. Rinse and repeat until Columbia catches on.

You know the deal.

Still have the same tape, in fact. Still think Presto is an amazing album, an underappreciated gem from their catalog. So many good songs to choose from that album but I'm going with the opener here. I actually prefer Presto (the song) and The Pass, and possibly Superconductor, but this one is harder and at least brushes up to the edges of being metal.

Video is not cooperating so you can view it here on YouTube.

The subjectivity of star ratings

What do you consider to be a five-star book (on a rating of 1-5 stars)? Or a one star book?
Is the former a book that you couldn’t put down? Or that covers its subject comprehensively and in impeccable detail? Or that is an acknowledged classic (but you didn’t necessarily enjoy)?
Is the latter a book that is badly written? Or maybe you could not finish? Or is it in a genre in which you have zero interest? Or, perhaps its even an acknowledged classic that you could not comprehend, and threw down in frustration.
It could be any one of these, which is why star ratings are so subjective as to be almost useless.
I used to rate books on a scale of 1-5 stars but eventually stopped the practice because I didn’t have a firm set of criteria that measured quality. For example, I once thought only a handful of the very best all-time books (The Lord of the Rings, Watership Down) etc. could earn a 5-star rating, which meant that other awesome books or stories could only earn a lesser rating. In short, I was grading on a curve. But this doesn’t really work; how can you possibly compare The Rise of the Fall of the Third Reich (a 5-star history if there ever was one) to The Lord of the Rings. If I found the latter more enjoyable to read, can the former only ever a achieve a 4 or 4.5 rating? Kind of nonsense.
So, I abandoned star ratings.
And yet, for some unexplainable reason I brought back a star rating for my recent review of Blood of the Serpent. But as I evaluate my 3.5 stars for that book, I realized my rating was not based on any objective measure of quality, but purely on whether the book met my expectations for a prose relaunch of Conan. It didn’t quite, hence the 3.5. But you might find it did for you, and give it a 5 (or didn’t at all, and rate it a 2).
If you look at Amazon or Goodreads reviews you will find that they do not correlate highly with quality. For example, Moby Dick rates at a 4.4 while the Da Vinci Code is a 4.6. Does that make the latter better? Perhaps, but it probably means some bored high school students took out their frustration on the former (they wanted Jaws or The Meg, but their expectations were unmet). Poul Anderson’s The Broken Sword rates a 4.2, below the sixth volume of 50 Shades of Gray (which rates a whopping 4.8/5). But most likely that’s because its readers got the S&M they wanted in 50 Shades of Gray, as opposed to readers who came to The Broken Sword expecting Brandon Sanderson length epic fantasy. And rated it lower.
This is a roundabout way of saying that thoughtful individual reviews are superior than the aggregate of a thousand star ratings.
Posted by Brian Murphy at 7:59 PM 4 comments:

Email ThisBlogThis!Share to TwitterShare to FacebookShare to Pinterest
Labels: Books

Blood of the Serpent: Is the New Conan Novel Really Conan?

This past weekend I finished the new Conan novel, S.M. Stirling's Blood of the Serpent. And wrote a brief review which you can find on the blog of DMR Books.

The TL;DR version should you not want to spare the click: 3.5/5 stars. I liked it, found it to be a well-written page turner, but not the terrific relaunch of authorized Conan prose fiction I wished it to be. I had high expectations, only partially met.

Have you read this? If so would be curious to hear your thoughts.

Metal Friday is a day late this week but coming in hot, ready to smash your face in with the death tone of amplified guitars and massive hammers of war.

Manowar is everything I love about sword-and-sorcery and heavy metal, in one glorious Ken Kelly infused package. Badass. Ridiculous. In your face. Muscular. Offensive. Fun. So over the top you’re not sure if it’s all tongue-in-cheek… then realizing it’s not, and then going “holy shit, OK” and leaning into it. Embracing the fact that life need not be cynical, or subtle. That it’s OK to like loud and obnoxious and even dumb things.

Yes Manowar has a few ridiculous songs … and I love those too.

Here are five guaranteed to raise my testosterone levels to the level of the occupants of a Viking longship circa 9th century AD, and get me ready to fight the world. Whilst eating beef and drinking ale.

Warriors of the World. The first comment on Youtube is I just played this song for my 4 week old son. He’s now 40 and a navy seal. Manowar has this effect, I've seen it. Probably their ultimate anthem.

Hail and Kill. By Divine Right, this one rips.

Fighting the World. I’ve been fighting the world every fucking day for nigh 50 years and will keep doing so… stripes on a tiger don’t wash away.

Master of the Wind. Manowar can do wistful ballads too … infused with mighty power. Manly tears. Might be played at my funeral.

The Sons of Odin. Love the groove in this one, hits you in the face from the opening beat and never lets up. Sword and axe sound effects. Valhalla I am coming, open the door.

New Edge Magazine kickstarter--get in on it 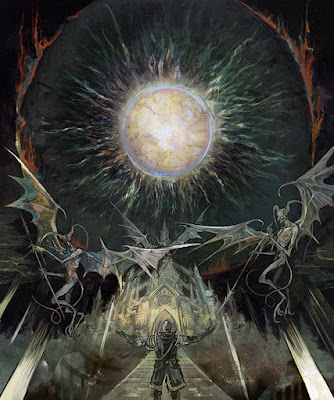 The sword-and-sorcery renaissance/modest revival continues. There is a lot going on in S&S circles these days, and I admit I'm behind in keeping up with many of the developments. I'll be doing my best to correct that this year.
One of the new projects I AM up on is New Edge sword-and-sorcery magazine. New Edge launched issue #0 last September to test the waters for a periodical that both embraces old S&S and expands its boundaries, and now has launched a kickstarter to fund issues #1 and #2.
You can sign up for updates here.
Signing up to be notified has extra value, including a first day physical backer exclusive: a bookmark featuring original art by Sapro (see above, this dude has some game. Love this piece).

I had an essay in issue #0, "The Outsider in Sword-and-Sorcery." I still owe a full read and review of the complete contents of this issue, but was impressed with Cora Buhlert's essay "C.L. Moore and Jirel of Joiry: The First Lady of Sword & Sorcery."

The kickstarter launches Feb. 2 and will cover production costs of issues 1 and 2. As well as paying the artists and authors... of which I'm one! I'm going to have an essay in issue #1, and as I understand it there will be a couple of much bigger names than my own contributing fiction.

I can't tip hand any more than that. Some cool stuff going on here.

Sign up for the updates and decide for yourself if this is something you want to back. I hope it smashes its goals. We need more good S&S.
Posted by Brian Murphy at 8:40 PM 2 comments:

Up on the blog of DMR Books is the big Excalibur post I've been meaning to write for years. 2K words about not just one of my favorite fantasy films of all time, but top 10 favorite films of any genre. It's also my attempt to analyze what director John Boorman's vision and objective was with this film, why the King Arthur myth endures, and what it can still teach us today. Why we need the old stories, and our inherited mythologies, which we abandon at our peril.

I think many viewers get hung up on Excalibur's sometimes stilted and declarative dialogue, the historical anachronisms, etc., and are too quick to dismiss what I believe is a masterpiece (YMMV). I've watched many subsequent King Arthur films that embrace more traditional filmmaking techniques, but none have managed to do what Excalibur did, which is render myth on screen for a modern audience.

Check it out here.

Fellow DMR blogger Deuce Richardson has pointed me in the direction of a "making of" documentary on Excalibur, "Behind the Sword in the Stone," which I shall view next: https://www.tvguide.com/movies/behind-the-sword-in-the-stone/2030331927/.

Finally, I'm glad Excalibur has resisted remakes some 42 years after its debut. I welcome new King Arthur films, but not a remake.

The late Ronnie James Dio pulled off something of a miracle with the release of The Devil You Know in 2009. Dio was 66 years old, had only 13 months to live, but somehow and he and the aged members of Heaven and Hell (aka, Black Sabbath) put together one final terrific Sabbath album. Much better than 13 IMO.
I love this entire album, but my favorite song is "Bible Black." I dig the atmospheric spoken word intro .. but strap on your jockstrap for 1:30 when it kicks in with a dark, heavy, murky, stoner groove that is everything I love about the Black Sabbath sound. It is the Black Sabbath sound, because a lineup that includes Tony Iommi, Geezer Butler, and Dio is Sabbath.
Crank this son of a bitch and enjoy your Friday.
Let me go
I've seen religion but the light has left me blind
Take me back
I must have the Bible Black