During a recent re-read of Karl Edward Wagner's Bloodstone I was struck by what appears to be some parallels and similarities to certain scenes in J.R.R. Tolkien's The Lord of the Rings. I started jotting down a few notes, and that became this 3,500 or so word essay over at DMR Blog. Check it out if you're interested.

For the record, I don't know for certain if KEW read LOTR prior to Bloodstone, and if he hadn’t that renders the observations in my essay entirely coincidental. There are many folks who knew Wagner personally who might be able to shed more light on this subject. But with all three volumes of LOTR available by 1956, and drafts of Bloodstone dating back to the early 60s before it was finally published in 1975, its possible KEW read it. The timing works out.

I don't think Bloodstone owes much to LOTR at all, and I don't think Karl was particularly influenced by it, other than riffing off certain scenes, sequences, and perhaps the nature of the ring. Regardless, this was a fun one to write.

Back in the mid-1980s a civil war was brewing in heavy metal. On one side were the standard bearers of “true metal,” fans of Iron Maiden and Black Sabbath, and Anthrax and Metallica. These bands rocked hard and built loyal fanbases with almost no commercial airplay or MTV time (the exception was Headbangers Ball, which safely confined them to the midnight hour when all respectable watchers were tucked safely in bed). Their fans were tough, wore denim and leather, and were proud of their bands. On the other side were the manufactured pop metal acts, bands like Poison and Warrant and Winger, who may have believed in what they did and often were quite capable musicians, but nevertheless had a pretty boy, teased hair look and shallow bubble-gum lyrics designed to appeal to a broad audience. These acts were known as “hair metal,” or in some corners (including my own), "false metal."

This division was best articulated in the lyrics of the loinclothed and sword-wielding American heavy metal band Manowar, which sang loud and proud that the War was On, man, and it was time to choose a side:

Now the world must listen to our decree
We don't turn down for anyone we do just what we please
got to make it louder, all men play on ten
If you're not into metal, you are not my friend

As an impressionable teenager and fan whose identity was tied to heavy metal music, I can tell you that I was in fact swept up in this faux conflict, and was a real man who played his boom box on ten. I knew with certainty which side I was on, and so I joined the ranks of those who mocked Judas Priest’s Turbo (1986). OK, so I did not actually outwardly mock the album, but I viewed it with a definite feeling of disappointment. It was hard to swallow that the same metal gods who gave us songs like “Beyond the Realms of Death” and “Victim of Changes” were in fact all too human, and could succumb to the forces of commercialism with an album that so obviously sought to capitalize on the popularity of the likes of Motley Crue and Def Leppard.

In short, Turbo felt a little like Priest had left the ranks of true metal and joined the false. There is nothing worse than a Benedict Arnold. I felt betrayed.

Some thoughts on Jack Vance's "Liane The Wayfarer" 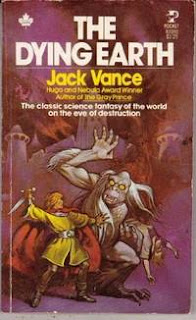 There wasn't a whole lot going on in the 1940s for sword-and-sorcery. You had Skull Face and Others by Arkham House, published in 1946, Unknown published 4-5 Fafhrd and the Gray Mouser stories. There were a few other exceptions. But in general it was like someone pressed the pause button on the subgenre after the creative outburst of Weird Tales.

Then came Jack Vance's The Dying Earth, published by Hillman Periodicals in 1950. Boom. I want to talk about one of my favorites from that fine collection, “Liane the Wayfarer.” Apparently this story also appeared in the December 1950 issue of Worlds Beyond magazine, though the details of this are sketchy.

The main character Liane is a genuine prick—S&S through and through. Mercenary, but much worse than the selfish Cugel. He casually kills a merchant, and is put out that the man dared to splash blood on his sandals. The nerve! He’s ready to rape a golden haired “witch” named Lith after spying on her as she bathes in a stream. She barely manages to fend off his amorous advances with the threat of ensorcelled knives. Liane is possessed of a “manifest will and power” and so believes that gives him the right to take her.

a beautiful tapestry depicting an idyllic valley, but it's ripped in half. The other half is with a being called Chun the Unavoidable. Lith tells Liane he can have her, if he gets the other half of the tapestry.

Liane is cocksure of his success, as he has in his possession a magic ring, which he found while digging a pit for the body of murdered merchant. When worn the ring transports him to an alternate plane of existence, rendering him invisible to the eye or perhaps whisking him away from this plane entirely. It works like a D&D bag of holding.

This is Vance, a master stylist, so the writing of course is exquisite. Describing the Dying Earth, Vance writes of “the red sun, drifting across the universe like an old man creeping to his death bed.” Vance does a brilliant job building up the suspense, dropping clues about Chun and steadily increasing the menace (and in turn the unease in the reader). For example, Liane mentions Chun to a group of wizards in an inn. They slink off, avoiding conversation. Liane finds a series of corpses, some warriors in armor, brave men, but all without eyes, staring up at the sky with empty sockets.

But he presses on. Liane encounters an old man trying to warn him off from Chun. Liane casually kills him by dropping a rock on his head. Did I mention he's an absolute bastard?

Liane approaches Chun's lair, and you can feel the quiet and the dull thudding of Liane’s heart as he eyes the tapestry. This is so well done (fiction writers take note, and read this scene).

Then comes the ending, which is a terrible shock. “Behind came Chun” repeated, inevitable, “running like a dog.” And the end is simply chilling, utterly disturbing. Lith gets another thread in her tapestry. 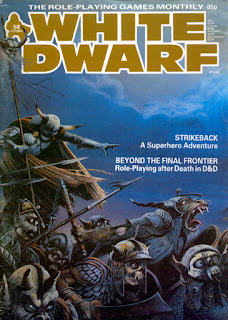 One final detail about "Liane the Wayfarer"--it was converted into a brief D&D scenario. Does anyone remember the RPG magazine White Dwarf? White Dwarf no. 48 (October 1984, which I have, and bought fresh off the newsstand from a local game store, and you cannot have) contained the mini-module "Chun the Unavoidable" of course based on this story. The accompanying artwork was simple but effective, depicting Chun as a creepy ape-like being with a skull face and a cloak made of human eyeballs.