Last week I had the pleasure of meeting a sword-and-sorcery legend: The talented Tom Barber, perhaps best known for his illustrations of Zebra paperbacks in the 1970s, including a Robert E. Howard title (Black Vulmea’s Vengeance), several Talbot Mundy reprints, and a trio of stunning covers for a Weird Tales paperback revival edited by the late great Lin Carter. Barber was a prolific fantasy and science fiction painter in the 70s and very early 80s, with credits on a wide range of paperback titles and magazines like Galileo and Amazing Science Fiction.  Here’s a great piece by Morgan Holmes focusing on his sword-and-sorcery work over on the Castalia House blog.


Tom has led an interesting life. He graduated from the Art Institute of Boston in 1967 and served as a Vietnam-era army medic in Germany from 1968-71, providing bedside care for some grievously wounded soldiers returning from the jungle. After an honorable discharge in 1971 he returned to the United States and began working as a full-time illustrator.

When I pulled into Tom’s driveway he was sitting in an Adirondack chair reading a Louis L’Amour paperback. Tom spent several years out in Arizona and the west is in his blood. You can see it in his incredible landscapes of towering red rocks, searing blue skies, and golden sands. Unfortunately at that time in his life he was in the throes of alcoholism. The war had left him with deep wounds, even though he wasn’t on the front lines. Tom was an imminent danger of succumbing to addiction before he was saved by a couple of Vietnam buddies who got him into a recovery program through the VA. He’s been clean and sober for years, and resumed painting in 2005.

After exchanging a few pleasantries, he took me into his unattached studio, suitably dark and mysterious with a bleached cattle skull greeting entrants. Inside I was greeted by some stunning original oils adorning the walls, from stunning landscapes to raging storms to the deeps of space. Tom took me on a guided tour of his artwork, including original oils as well as a nice .ppt slideshow of all of his major art, many of which now sits in the hands of private buyers. I glimpsed a stack of Conan Dark Horse reprints, recently given to him by a friend. We talked a bit about Howard and sword-and-sorcery, but also about Harlan Ellison and Steven Pressfield’s superlative The War of Art, among other wide-ranging subjects.

Three of the most stunning paintings in his studio are quite personal in nature: One is a trio of Vietnam soldiers, the original of which is on permanent display at a Vet Center in White River Junction, VT. It’s a moving work of art, with two soldiers helping up a third wounded comrade. The other is a quartet of bikers, two of which are Vietnam vets. Tom told me that the guy on the left ran point for a year in the bush and survived the 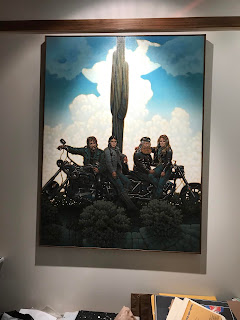 ordeal with barely a scratch, and remains the most perceptive, aware person he’s ever known. Undoubtedly not a coincidence. The other guy to me looks like a lot like Karl Edward Wagner, though he’s not. Both helped Tom get sober in the mid-80s.

The third piece of art is a conceptual/symbolic work, a skull ripping free of a man in a straightjacket. Tom told me this a self-portrait, his own breaking loose of addictions and society’s pressures. It’s called (appropriately) Free At Last. He also showed me a press proof of Adrian Cole’s Bane of Nightmares, one of a couple Barber illustrated titles I have on my bookshelf. I bought a copy of his book What the f*** was that all about? The story of a warrior’s journey home, a fictitious account of a Vietnam Veteran’s struggles with addiction and reintegration to society that loosely mirrors Barber’s own struggles.

Tom was full of wisdom and is a true artist’s artist. I wish I had a tape recorder running, but I do remember a couple of his memorable bits of advice and storytelling: “Art that isn’t shared with the world is only half finished.” Of his decision to leave commercial art in the early 80s, the jobs were becoming the equivalent of “filling in a coloring book,” leaving little room for artistic license or interpretation. He seemed genuinely touched that I took such an interest in his work, and he likewise offered me many words of support for my upcoming work.

Tom is going to be illustrating the cover of Flame and Crimson: The rise, fall, and relevance of sword-and-sorcery. It’s my upcoming non-fiction study the sword-and-sorcery subgenre. I am humbled to be collaborating with an individual of his talents and resume. We met through Bob McLain, the publisher of Pulp Hero Press with whom I am under contract. Initially I was planning to come to the meeting with Tom to offer him some concrete ideas for the cover, but after hearing him talk about coloring books I’m glad I did not. Artists need creative freedom.

Tom gave me a pencil sketch and I’m super pleased with the early concept: Simple, stark, eye-catching, with a classic sword-and-sorcery feel. It definitely won’t be a lifeless Frank Frazetta clone. I can’t wait to see the finished product.

In addition to the art in his studio Tom has several (as many as 20-30) paintings in storage in a gallery in Franklin, NH. I’m heading back up to Andover next month and we’ve already made plans to head over to Franklin and look at the rest of his art. I can’t wait. Expect more photos and coverage.
Note: You can find Tom’s personal website here: http://tombarberart.com/.

Iron Maiden has been ignored by radio stations their entire career. Largely passed over by mainstream media outlets. And granted no consideration by the Rock and Roll Hall of Fame. But on Thursday, August 1 they played in front of a sea of 19,000 fans at the sold out XFinity Center in Mansfield, MA.

I was one of them. And they kicked my ass.

It's unbelievable that these six dudes from England, now all in their 60s, can still sound this fantastic and draw such huge crowds. They've kept themselves in great shape, stayed off the drugs that got so many metal bands in trouble, and possess an incredible degree of artistic integrity. As a result they've built up an incredibly loyal fan base. Maiden requires no external, artificial support to sell tickets. Their music speaks for itself.

These days for me, concerts are in all honesty more about the friendship than the music. As great as
Maiden was, hanging out in the parking lot for a couple hours beforehand drinking beer and blasting Maiden CDs with a couple friends on a beautiful 80-degree night, was the highlight. Just an unbelievable amount of fun, you could not wipe the shit-eating grin off my face.

Inside, seeing Maiden rip through Aces High with a full-size Spitfire over the stage, and Bruce in a leather pilot jacket, aviator goggles and leather helmet, had me grinning ear-to-ear. Hearing Churchill's speech over the PA always makes me want to scramble a fighter and shoot down some ME-109s.

I got to hear The Clansman and belt out the epic ass-kicking patriotic verses (see above). Where Eagles Dare had me air-drumming in a frenzy. For the Greater Good of God was unexpected, an excellent song from a great album (A Matter of Life and Death). I loved Sign of the Cross, the second song Maiden pulled out from the Blaze Bayley years. It's heart-warming that Bruce performs songs during the era he chose to leave the band to pursue a solo career.

Bruce was in fine form singing and is a smashing entertainer. He came out for Fear of the Dark in a dark trenchcoat, looking like Jack the Ripper, slowly swinging a sinister green lantern back and forth as he intoned the opening verses ("When the light begins to change; I sometimes feel a little strange; A little anxious when it's dark"). You know the rest. He battled a monstrous Eddie on stage during The Trooper.

You can find the complete setlist here if you're interested. If you're at all a fan of heavy metal you owe it to yourself to see Maiden on this tour. Of course I'd say that about every Maiden tour.
Posted by Brian Murphy at 8:54 PM 5 comments: