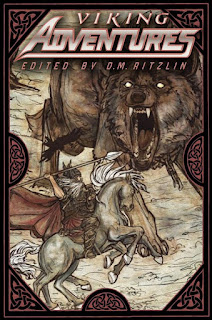 Some news, happenings and noteworthy occurrences heard on the sword-and-sorcery trail.

DMR Books to publish Viking Adventures in August. Just take my money. Although I've read a fair bit of Viking historicals and Viking flavored fantasy, I'm not familiar with these tales which makes it all the better. In particular I'm looking forward to reading "The Trader and the Vikings." With works like The Broken Sword and Hrolf Kraki's Saga, Poul Anderson does the Northern Thing as well as any author past or present. And damn, that cover (see right). Speaking of DMR you can now pick up Flame and Crimson at that fine publisher.

If you like Conan the Barbarian (1982), this 2 1/2 hour+ video by The Critical Drinker (how fun is that name?) and guest Andre Einherjar is worth the watch. This is an incredibly in-depth, informed, interesting, and just plain fun and compelling listen, with lots of interesting asides on Milius, Dino DeLaurentiis, the riddle of steel, the train wreck that was Conan the Destroyer, and more. I realize a lot of Howard fans don't like CtB, mainly because Schwarzenegger's Conan is not REH's Conan, but these guys make a compelling case that it's a work of surprising depth, and exceptional artistry and quality. I happen to agree.

As for me, I've got an essay on C.L. Moore that will definitely see the light of day as Swords & Shadows has met its funding goals, ensuring that this special sword-and-sorcery themed issue of Sexy Fantastic magazine will be published. I'm also working on a review of Fred Blosser's The Annotated Guide to Robert E. Howard's Weird Fantasy for The Dark Man journal (spoiler alert: It's good). 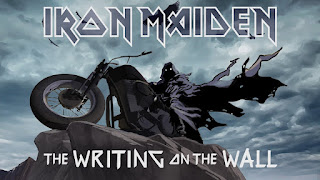 It’s going to be a metal summer and fall, and man am I excited for what's to come.


The great Iron Maiden (my favorite heavy metal band ever, sometimes Judas Priest ekes out the no. 1 spot) has released a new single, The Writing on the Wall. I was on vacation when this hit and experiencing it first over shitty iPhone speakers was a mistake. I made myself wait until we got home and had proper sound/headsets before the next attempt. I haven’t given it enough listens to make up my mind, but with each spin it gets better. Love the opening hook and the Celtic feel. No, Bruce is not the same singer, but damn, he’s 60. Who is at that age? Regardless of what the album holds, new Iron Maiden is always a cause for celebration, as is the prospect of seeing the boys from Britain live on their inevitable support tour. The fun I’ve had at these shows over the years is off the charts. I suspect “The Writing on the Wall” will kick ass in concert. I CAN’T WAIT.

Concerts galore. I’ve got three shows lined up for the summer and fall:

Let’s hope this new Delta variant of COVID-19 cooperates and I can get all these in.

Also wanted to mention the passing of Mike Howe, lead singer of Metal Church, dead at 56. A reminder of our mortality. This is why going to shows and enjoying life today is so important because damn, once it’s over it’s over. Apparently he was a family man and in great shape and no cause of death has yet been released. I was not the biggest Metal Church fan but loved a few of their songs, in particular “Badlands,” “Fake Healer,” and “Date with Poverty,” among others. I’m pretty sure I still own the cassette of The Dark. Time to crank some Badlands and remember Mike. RIP.

I've been seeing some promising signs of a modern day sword-and-sorcery revival, with a growing number of small publishers putting out new works or collections of reprinted works from the old masters. Digital and print magazines are springing up (Tales from the Magician's Skull, etc.), and there's some good scholarship going on in certain corners (DMR, The Dark Man, etc.). All encouraging, and maybe there's a kernel here that will grow.

But sword-and-sorcery is still a niche within a niche. If it's ever going to reach its former heights it needs a lot of help.

Here's what I think sword-and-sorcery needs in order to flourish once again.

1. More readers. We are now seeing many small outlets for S&S fiction crop up, but nothing resembling real commercial markets. It needs to get mainstream, with a larger audience, and more paying consumers to create a viable market for writers and artists. Morgan Holmes once said something along the lines of, what is needed is the modern equivalent of the mass-market S&S paperback of the 1960s and 70s--cheap, eye-catching covers, with good, simple, page-turning stories to back up the packaging. With wide distribution, although times have changed. Printing costs are higher and the days of the drugstore wire-spinning racks have gone, replaced by the online juggernaut Amazon.

2. Good authors. From what I have read there are a few talented modern S&S authors working in the genre today, but who will be our next Robert E. Howard, Fritz Leiber, or Jack Vance? There are a few modern bestselling fantasy authors that I dig--Joe Abercrombie and George R.R. Martin come to mind. Could we see them or their equivalent attempt an S&S splash?

3. A cohesive community, perhaps organized around a fanzine. Guys like Jason Ray Carney are building this right now, with the likes of Whetstone, an amateur magazine that also has a Discord group. I belong to several good Facebook groups, and there are some reasonably well-trafficked Reddit groups and the like. You've got the Swords of REH Proboards and a few other hangouts for the diehards. But it all feels very disparate. Sword-and-sorcery lacks a common gathering space and watering hole, like Amra used to serve. Leo Grin's now defunct Cimmerian journal is the type of publication I'm thinking of.

4. Some type of award, a recognition of excellence for authors and publishers and the like. The closest we had were the Gemmell Awards, which recently died off. I'd love to see a "sword-and-sorcery" category at the Hugos or the Locus Awards but I'm not holding my breath.

5. A crossover hit, probably a film (or a video game). There's a lot of debate over whether these types of media foster readers, but an actual good sword-and-sorcery film (if such a thing were possible) that garnered a lot of good press, and led some mainstream journalists and bloggers to take the time to point the way to the fiction, could spur new interest and new blood. A wildly popular video game may have the same effect. I don't think comics are popular enough these days to spur the level of interest we saw with Conan the Barbarian in 1970.

We will never see the likes of 1968 again but I do think we could experience a third S&S renaissance, if we could make a few of these happen.

Email ThisBlogThis!Share to TwitterShare to FacebookShare to Pinterest
Labels: Sword-and-Sorcery, Thoughts on fantasy

In July (starting today, in fact), Dream Tower Media is running a 30-day fundraising campaign to finance issue 4 of Sexy Fantastic magazine: Swords & Shadows! This is a quarterly SF and fantasy digital magazine of art, literature, and culture, produced and managed by Robert Szeles (aka, Robert Zoltan) of the Literary Wonder and Adventure Show podcast.

This issue is all about sword-and-sorcery. Supporting patrons can unlock a few gifts, one of which includes a signed copy of my own Flame and Crimson, as well as Ryan Harvey's science fantasy novel Turn Over the Moon, Szeles' sword-and-sorcery novel Rogues of Merth: The Adventures of Dareon and Blue, and other goodies, including art, podcast interviews, and more.

I've written a piece on C.L. Moore for Swords & Shadows and her unique contributions to the sacred genre. This issue will also feature four heroic fantasy/sword-and-sorcery tales, including one by the outstanding Adrian Cole.

Posted by Brian Murphy at 11:21 AM No comments: