Introducing Flame and Crimson: The rise, fall, and rebirth of sword-and-sorcery

"Let me live deep while I live; let me know the rich juices of red meat and stinging wine on my palate, the hot embrace of white arms, the mad exultation of battle when the blue blades flame and crimson, and I am content."

I have loved the sword-and-sorcery genre ever since I was a kid, going back at least some 35 years I’d warrant. If my memory is correct it began with a fortuitous find of a treasure-trove of The Savage Sword of Conan magazines, a story which I detailed here a while back on The Silver Key. Since then sword-and-sorcery has been a huge part of my reading life, informed my one-time obsession with Dungeons and Dragons and fantasy role-playing, and even led me to seek out some heavy metal bands that proudly fly the sword-and-sorcery banner.

So I figured, why not write a book on the subject?

I have, and the result is Flame and Crimson: The rise, fall, and rebirth of sword-and-sorcery. It’s due to be published at the end of the year by Pulp Hero Press.

Pulp Hero Press is so new it doesn’t even have a website yet. But it has published a handful titles of significant interest to fans of S&S, and Robert E. Howard in particular. These include Barbarian Life: A Literary Biography of Conan the Barbarian by Roy Thomas, Robert E. Howard: A Literary Biography by David C. Smith, Western Weirdness and Voodoo Vengeance by Fred Blosser, and Savage Scrolls: Scholarship from the Hyborian Age, also by Blosser.

Just this past Friday I sent the files over to the publisher, but there is more work to be done. I’ll be seeing them again post-edit. The plan is to have the book in circulation and available for purchase by early December.

I have a written a lot during my 46 years on the planet. D&D adventures and ridiculous made up stories I and my friends wrote for kicks. Essays and term papers. Spiral notebooks full of book reviews I hand wrote during the pre-internet days. I have worked for a daily newspaper and covered local news, town politics, and high school sports on deadline, including high school football for 22 years and counting. I’ve written for various fantasy websites and blogs, including a few hundred posts here at the Silver Key of course, as well as essays appearing in a handful of print journals. But I’ve never written anything long form. Until now.

Flame and Crimson was a ton of work, which I’ll detail in full later. Suffice to say it was a lot of research. I had many holes to fill in my reading, a lot of old books that I had to track down and buy. I was able to get a hold of the entire run of the REH/sword-and-sorcery fanzine Amra. I watched a lot of bad sword-and-sorcery films. Then it was outlining, and revising the outline. The table of contents underwent many revisions and changes. I wrote, and revised, and re-revised, and edited, and wrote some more. I started work on the book some six years ago but had to put it on hold for the better part of a year. But I never gave up hope. I spent more nights then I care to count plugging away on the computer, an hour here or there as time allowed. I’ve had some help along the way by an expert or two on the subject, better read than I. Finally, it’s (almost) fit to print.

Flame and Crimson is an academic study of the genre, heavily referenced and with a lengthy works cited (I see MLA citations in my sleep). Anyone who has looked under the hood of sword-and-sorcery has realized the dearth of good published material on the genre itself. Lin Carter’s Imaginary Worlds has a couple chapters on it. Some anthologies contain working definitions, but these are typically breezy and lightly sketched. You can find articles online easily enough, but in the main these are informal, subjective, and often well-intentioned, but misleading. Sword-and-sorcery as a term is still used to describe works as diverse as The Lord of the Rings, Forgotten Realms tie-in novels, and the Mists of Avalon.

But while I wanted to add some degree of academic and critical rigor to the subgenre I didn’t want to write something dry and pedantic. One of my goals was to try and tell an exciting tale of non-fiction. Sword-and-sorcery has a story of its own to tell, of a confluence of pulp talent, a mercurial renaissance, a staggering commercial fall, and a second life in the popular culture. I wanted to write the kind of academic study that I’d want to read—informative, but also entertaining. I hope I have succeeded, or at least have written something that will provoke reactions, discussion, and get people interested in exploring my favorite subgenre of fantasy fiction.

I am super happy with the cover, which I’m revealing here for the first time. I’ve been detailing my experiences with veteran science fiction, fantasy, and sword-and-sorcery illustrator Tom Barber, and I’m pleased to say he has painted the cover of Flame and Crimson. I could not be more pleased with the work. It’s simple, stark, and evocative. Tom is a legend with a tremendous body of work, and I’m not sure I’m worthy of his talents.

I cannot even begin to describe how exhilarated I am to have written this book. And to soon be sharing it with you.

A meeting with Tom Barber, part 2

During our first meeting at his Andover, NH home in August, Tom mentioned that several more of his paintings were in storage in a gallery in the neighboring city of Franklin. This past Labor Day weekend I was able to fold in a second trip to meet Tom at Toad Hall, a beautiful old brick commercial building in the heart of Franklin whose third floor houses many of his paintings.

The gallery opened to the public on June 5, 2015 with art and live music, but on this fine Saturday afternoon Tom had to let us in with a key, as the gallery has since shuttered its doors. A web page and a Facebook page speak to what it was, briefly—an attempt to bring some art and light into a run-down community, trying to shake off its image as a mill city that never recovered from the economic downturn of the 1970s. Toad Hall had big plans for this revitalization with the art gallery and a first floor restaurant and microbrewery, but these seem to have stalled out and construction on the restaurant has ceased.

But apparently revitalization efforts continue in New Hampshire’s smallest and poorest city, with a white water park in the works, and ground set to be broken. 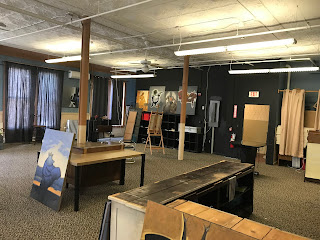 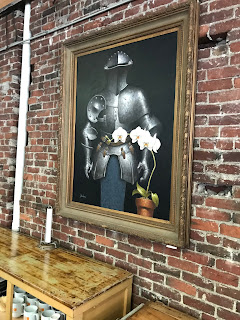 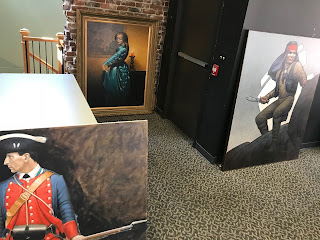 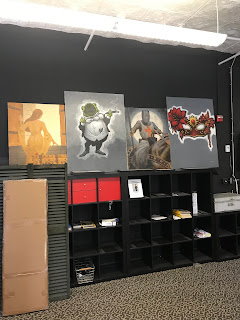 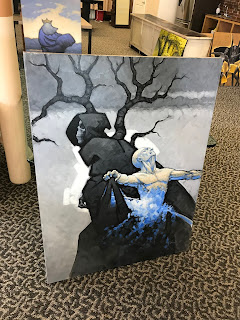 But up on the sunlit third floor gallery Tom’s paintings were vibrant and powerful. Tom walked me through pictures of knights in renaissance armor, burning spacecraft, beautiful enchantresses, and scenes from Arizona where he lived for a short stretch in the 1980s. An image of King Lear brooding over his life as he looks into a rapidly fading sunset. Tom also showed me several conceptual pieces which I found particularly arresting, including this one (above, left) of a soul embracing and thus breaking free of the fear of death which looms over all our collective shoulders. There was also a wonderful image of a crusader silhouetted against the moon, still in need of some finishing touches. All of this is for sale by the way.

Some more interesting facts about Tom: The two artists that inspired him most were Monet and N.C. Wyeth. The latter is of course a hugely popular illustrator perhaps best known for his western art and his wonderful illustrations for Robert Louis Stevenson’s Treasure Island. You can see the clear influence of Wyeth in Tom’s work. Monet meanwhile I can see in his hazy interstellar art and images of the night sky. Tom’s agent once hosted a dinner in his apartment with Tom and a second guest named Fritz Leiber. He met legendary sword-and-sorcery artist Jeffrey Jones at a Boskone convention, and at another show displayed his art between Harlan Ellison and Ray Bradbury.

I can now say I’m one degree removed from these artistic legends, which is pretty cool.

During this meeting Tom also revealed the striking cover art he has created for my forthcoming book, Flame and Crimson: A history of sword-and-sorcery fiction. It’s awesome. I’ll post a picture of that shortly. 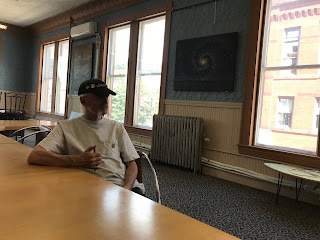