My latest entry for DMR is up. Check out Moorcock's Missed Elric Opportunity here.

This one seems to be gaining a lot of traction on Facebook and elsewhere. Combine a classic fantasy property with an interested director in 1970s Hollywood, and season with reminiscence by the author himself culled from a recent podcast--wham.

For the record, I don't need to see my favorite books adapted into film--I'm perfectly happy if they remain on the printed page. But I can't help but wonder what a Ralph Bakshi adaptation might have looked like. A mess quite likely, but perhaps something glorious, or at least messily memorable. The point is, we'll never know.

Maybe one day Elric will be adapted to the screen, but Moorcock had the opportunity 43-odd years ago, and there's been nothing of substance since. Just speculation and development hell.

Posted by Brian Murphy at 8:57 PM No comments:

Sifting Through a Sword-and-Sorcery Definition

Latest mini-essay is now up on Goodman Games/blog of Tales from the Magician's Skull.
The metaphor of sword-and-sorcery as a sifter came to me while cutting the grass. I wish I could say it was a more profound process but that's it. The drone of the John Deere is apparently my muse.
It's frankly not possible to create a definitive, unassailable list of sword-and-sorcery authors or stories. Nor is it advisable. Trying to do so is not only a fruitless endeavor, but ultimately unhealthy for the process of art. I love the rush of enthusiasm when someone sends me a link to a new comic book or animated film and writes, "dude, check this out, it's SO sword-and-sorcery!" Most who are familiar with the subgenre will know what this sentiment means; whether it ultimately qualifies is always going to be subjective, and in the eye of the beholder. As I argue in the linked essay, it all depends on how fine your definition of S&S is, and what you will allow to pass through your personal sifter, or be caught and held.
I've already seen a comment on Facebook in my response to my essay that "all labels are stupid," which is rather ill thought-out. I wonder what this same person would say if I slapped a mustard label on his ketchup and he proceeded to pour it over his hot dog (who adds ketchup to a hot dog?). Labels have a purpose; broadly they get us where we need to be, and ultimately we decide if we want Heinz or Hunt's or French's or whatever. Your mileage may vary, of course.
Posted by Brian Murphy at 8:13 AM 2 comments:

I'm still in the discovery/absorption phase of Senjutsu, Iron Maiden's new album. This has been my pattern with all of Maiden's releases of the last two decades. Starting with their first post reunion album, Brave New World, Maiden has tended to write longer material that takes time to absorb. I've been busy with work and other things and so haven't yet gotten a proper feel for the album in its entirety.

A couple of songs grabbed me right out of the gate, however, among them "Darkest Hour." This is the latest entry in their various odes to World War II ("Aces High," "The Longest Day," etc.), and is a powerful, heartfelt ode to Winston Churchill and his refusal to accede to his critics and bend the knee to the Nazi war machine: 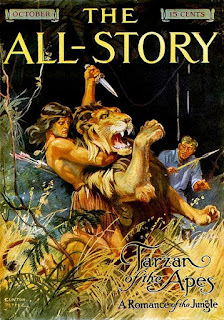 Edgar Rice Burroughs (1875-1950) was born on Sept. 1, and as this coincides with my current read: Edgar Rice Burroughs: The Man who Created Tarzan, a massive two-volume biography by Irwin Porges, I thought it was time for a post in honor of ERB, albeit a couple days late.

I now consider ERB one of the holy trinity of speculative fiction, along with Howard and Tolkien. He’s right up there with those two in influence and imagination. Your mileage may vary but that’s my power trio, with H.P. Lovecraft coming up close in the rear-view mirror.

Sometimes you can find clues of what makes a great writer by analyzing the facts of his or her life. From a young age ERB was a restless, free spirit. He was highly imaginative, and playful, but he was also relentless. He didn’t stay at any one job for long as he was always searching for the next move, the next scheme, or the career that would lend his life meaning. The string of low-paying jobs he held did not.

These traits often got him into trouble as a youth and resulted in financial woes as a young man. He preferred the outdoors to studying in class. In the army, his nonconformist streak caused him to get busted down in rank and never made him a great fit for the discipline of the armed services. Upon discharge in 1897 he had to overcome a number of struggles all the way to early middle age. These were often of his own making. At several junctures he could have settled for a life of normalcy, but time and again opted out. At one point he was on his way to financial security with a great job at Sears, and senior leadership loved him, but he quit, abruptly.

I know I could not have made the choices he did, which often left he and his young wife penniless. But, his choices ultimately gave us worlds beyond worlds.

ERB finally broke through as a writer in 1912 with “Under the Moons of Mars,” and later that same year “Tarzan of the Apes,” both published as serials in The All-Story. That’s a hell of an opening combination right there. By then he was in his late 30s, a relatively late start for a writer, but the stage was set for a torrent of production. He had lived a life of scarcity and brushes with poverty, and when he finally found his calling the creativity rushed from his pen.

ERB famously wrote that “entertainment is fiction’s purpose,” and his stories are entertainment first, of the highest order. But they weren’t just that. He explored themes of nature vs. nurture, and the evils and depravity of civilization vs. the (harsh) purity of nature. Destructive man with all his vices is contrasted with the beasts of the jungle, who kill and eat but not out of malice or wanton destruction. ERB was also a skilled satirist, critiquing organized religion for example in “The Gods of Mars.” His stories offer a coherent and compelling worldview and a richness deeper than just story.

ERB was influenced by H. Rider Haggard, the grandfather of adventure fiction. Tarzan was derived from the Romulus/Remus myth in which the two founders of Rome were raised by wolves, and to a lesser degree Kipling. But by his own admission ERB was not a big reader of fiction; these were childhood reads. Perhaps as a result, stylistically he is probably the weakest of the major fantasists mentioned above. But his stories are propulsive, and his ideas and storytelling and creativity are on another level. He was doing things no one else was, breaking away from the more formal Victorianism of Haggard et al and writing stuff the people of the age could not put down.

It’s a shame that ERB did not live a bit longer to see the resurgence in interest in his works in the Burroughs Boom of the 1960s. Like REH I’m not sure how widely read he is these days. But both men’s creations are immortal. Just like we’ll always have Conan, John Carter and Tarzan are with us to stay.

Porges’ bio starts slow, 170-odd pages of military and schooling detail that run a bit tedious. But once “Under the Moons of Mars” is out, it hits its stride. In my reading it’s currently October 1912 and Burroughs is finally meeting with success. He’s just completed “The Gods of Mars” for All-Story editor Thomas Metcalf, reader demand for more is huge, and although he has not yet landed a book deal his fortunes are about to dramatically shift.

It’s like I’m reading one of his stories, and I can’t wait to see what dramatic twists and turns come next.