The Silmarillion: Thirty Years On, a review 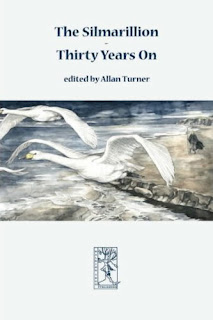 The 1977 publication of The Silmarillion was a singular event in fantasy fiction. I’m happy to stand corrected, but I can’t think of another book of foundational myths and legends about a fictional, secondary world published prior. But as I mentioned in my introduction to my series Blogging the Silmarillion it also left most critics puzzled, even put-out or angry. Expecting another The Lord of the Rings, many acted with bafflement, others with harsh criticism.

But in the subsequent 35 years opinion seems to be shifting. While it will never be as popular as The Lord of the Rings or The Hobbit, most fans of Middle-Earth view The Silmarillion as absolutely indispensable. Other genre fans do too, it seems. For example, in a recent vote of over 60,000 genre fans to determine the Top 100 Science Fiction and Fantasy books The Silmarillion checked in at no. 46, proving that it’s more than just a book for the JRRT fanboy.

As for Tolkien scholars The Silmarillion is a goldmine, bringing to life ancient ages of Middle-Earth that were previously only hinted at in poems and appendices to The Lord of the Rings, or in Tolkien’s personal correspondence. The Silmarillion provides us a startlingly new perspective on the workings of free will and fate in Middle-Earth, of the nature of evil, and the problem of death. It showed how Tolkien forged his world from Christian and Pagan influences, including the Old Testament, Celtic myth, and Norse legends. The Silmarillion introduced readers to the eldest days of Middle-Earth, including the “hows” of its creation and the “who” of its chief creator, along with its wide-ranging geography, both pre and post-cataclysm. It also opened a new window into Tolkien’s creative process, including his ingenious method of creating depth by layering “forgotten” texts and “historical” events and myths on top of each other, a technique that produced a three-dimensional world that feels real, and lived in. Soon the debates began about how much of the work was Tolkien’s own vs. that of his son Christopher, who finished and published The Silmarillion after his father’s death with the aid of fantasy fiction author Guy Gavriel Kay.

The incredible significance of The Silmarillion and the exciting new avenues it opened up are summed up in The Silmarillion: Thirty Years On (Walking Tree Publishers, 2007). This collection of six essays includes one previously published piece by Rhona Beare in a now out-of-print introduction to The Silmarillion, but it is completely rewritten for this book. The other five pieces are original scholarship. 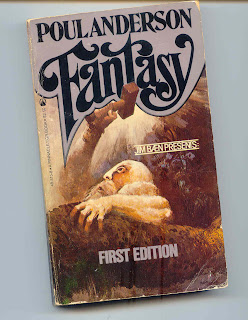 I’ve always enjoyed fantasy fiction in the short form. In an age when a typical series stretches seven-plus doorstopper sized volumes without the guarantee of an actual ending, it’s refreshing to take a quick dip into the pool of the fantastic rather than committing to a read akin to a trans-Atlantic journey in the age of sail.

If you are new to the heroic fantasy/swords and sorcery genres the following six stories are fine stepping stones for further exploration, at least in my opinion. I’ve deliberately chosen stories written by authors not named Howard or Leiber; REH and Fritz are the best these genres have ever produced but there’s already plenty of ink spilled about them. I obviously have nothing but praise for “Worms of the Earth” or “Bazaar of the Bizarre” but I’m sure most of Black Gate's readers have very likely already read these stories, so I present these six instead.

Sorry for the lack of posts of late, I sincerely hope to get back on a more regular schedule. But here is a bit of news worth sharing: According to this rather sparse, cryptic entry on Amazon.com France, Tolkien's previously unpublished poem "The Fall of Arthur" is planned for a May 2013 release.

"The Fall of Arthur" is a lengthy (954 lines), alliterative, and unfinished work. Tolkien loved reading the Arthurian myths as a boy and in the early 1930s began to write "The Fall," but ultimately abandoned it, though various outlines and drafts survive in addition to the final unfinished text (source: The J.R.R. Tolkien Companion and Guide, Christina Scull and Wayne Hammond, p. 56). Ultimately Tolkien fell away from the Arthurian stories, which he regarded as too mixed with other elements and influences and lacking enough of Britain's character; the stories were "associated with the soil of Britain but not with English," according to Tolkien. Hence his reason for writing The Lord of the Rings and its supporting legendarium as told in The Silmarillion and elsewhere, which serve as an alternative mythic history of England.

Like "The Legend of Sigurd and Gudrun" I fully expect that this will come and go without huge fanfare or sales. But for hardcore fans of Tolkien and Tolkien scholars, it's huge. Maybe not quite as huge as say, the discovery of Excalibur, or Arthur returning over the sea from Avalon to set our darkening world aright again, but huge nonetheless. And it just might prove to be a cracking good read; again quoting from Scull and Hammond:

Humphrey Carpenter comments in Biography that in his work 'Tolkien did not touch on the Grail but began an individual rendering of the Morte d'Arthur, in which the king and Gawain go to war in "Saxon lands" but are summoned home by news of Mordred's treachery .... It is one of the few pieces of writing in which Tolkien deals explicitly with sexual passion, describing Mordred's unsated lust for Guinever (which is how Tolkien chooses to spell her name .... ' But here Guinever 'is not the tragic heroine beloved by most Arthurian writers'; rather, she is a 'lady ruthless / fair as fay-woman and fell-minded, / in the world walking for the woe of men.'


Hat tip to the Mythsoc listserv for the news.
Posted by Brian Murphy at 8:31 PM 1 comment:

The Name of the Rose by Umberto Eco, a review 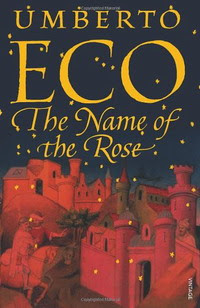 Warning: Spoilers ahead; I’m attempting to keep them minor

The good of a book lies in its being read. A book is made up of signs that speak of other signs, which in their turn speak of things. Without an eye to read them, a book contains signs that produce no concepts; therefore it is dumb. This library was perhaps born to save the books it houses, but now it lives to bury them.

--Umberto Eco, The Name of the Rose

There are days when I feel rather ambivalent about the internet. When I was growing up back in the early-mid 80s the concept of lore still existed. No one I knew could tell you what the symbols on Led Zeppelin 4 really meant; it was all speculation. If you wanted to find out you had to ask a guardian at the gates, perhaps a burnout with a subscription to Rolling Stone or Kerrang who could (sort of) give you the straight dope. Knowledge was concentrated among the few and you had to work hard to earn it.

Of course even back then you had public education and public libraries; the information was still there, just slightly less accessible than today. Now all you have to do is punch everything into Google (buyer beware about the quality of information returned, but you’ll find something). And though much is gained in this process, something is lost.

But most of the time I’m glad I live in the information age. It’s hard to imagine a time in which books were incalculably precious items, patiently copied and illustrated by monks in a painstaking manual process. This is the setting of Umberto Eco’s The Name of the Rose (1980), which takes place in a 14th century Medieval monastery, home to a group of monks and a library of old tomes and scrolls. When a monk dies under mysterious circumstances new visitor William of Baskerville is tasked by the abbot to investigate. Over the next seven days a different monk is murdered according to precepts laid out in Revelations, heightening the mystery and the urgency.

Back from vacation with a Black Gate post on WWZ

Well, I'm back from our annual family vacation in New Hampshire, a small slice of fun and relaxation that is almost entirely internet free, even in this day and age of satellites and cell phone towers. So obviously it's been a while since my last post. Time to dust things off and get started again.

If you're interested, I wrote a brief blurb about the sad state of the World War Z film over on Black Gate (nothing too revelatory; I owe them a post every other Thursday and so had to dash something off last night. Gee, I'm really selling it well.) You can read the post here. WWZ is a great book that deserves a great film but I'm not liking what I'm reading about the project so far...