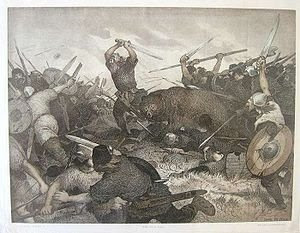 The ‘battle piece’, as a historical construction, is as old as Herodotus; as a subject of myth and saga it is even more antique. It is an everyday theme of modern journalistic reportage and it presents a literary challenge which some of the world’s masters have taken up.

—John Keegan, The Face of Battle

I read fantasy for the story, for the escape, for the adventure, for the monsters and magic, and for the memorable characters. The best fantasy has the added bonus of examining the important matters in life (God or his lack thereof, mankind’s purpose on earth, society and civilization) and exercises the mind in higher thinking.

But heck, I’ll admit it: I also read fantasy for the fights.

There’s nothing I enjoy more in a book than a well-portrayed battle scene. In the next few posts I’ll be exploring my top 10 favorite fantasy battles. These are epic combats that inspire with their courage, frighten with their ferocity, sadden with their pathos, and occasionally sicken with their terrible carnage and destruction. But above all else they are a joy to read.

These posts will celebrate the mass battles; fantasy has its share of great single combats too (Eowyn vs. the Witch King in The Lord of the Rings, and Gregor Clegane vs. the Red Viper in A Song of Ice and Fire are two that immediately spring to mind), but solo duels or minor skirmishes are for another day. Several of these large-scale battles, however, do feature terrific single combats within them.

Some of this list is borderline “fantasy,” since I’ve included entries from the historical fiction genre and events that really happened. But since the details of these ancient battles are largely lost to the passage of time, and out of necessity must be heavily re-imagined by the author, I have included them here.

So without further ado, and in no particular order, sound the horn, shields at the ready … Now for wrath, now for ruin and a red nightfall!

(Warning: If you haven’t read these books, be prepared to experience some spoilers).

I’ll tell you right off the bat that the final, climactic battle from Poul Anderson's Hrolf Kraki's Saga will be hard to top. It features boar-trolls, attack dogs, shield walls, men in bear form, heroism, slaughter, and ultimate ruin. In brief, the build-up to the battle is as follows:

A great host of evil led by the false King Hjorvardh and the wicked Queen Skuld march through the night to murder Hrolf Kraki and his men, sleeping unawares at the stockade fortress of Leidhra. Fortunately Hrolf’s man Hjalti sees the traitorous host coming and rides his horse at a breakneck pace to rouse his lord. Hjalti’s horse dies from exhaustion as he reaches Leidhra, and, leaping from his falling mount, awakens Hrolf and his men to the danger with a fragment from the ancient Bjarkamal:

Athelings, rise up and honor your oaths,
all that you swore when the ale made you eager!
In foul winds as fair, keep faith with your lord,
he who withheld no hoard for himself
but gave us freely both gold and silver.

Hjorvardh and Skuld’s massive army encircles the fort. They dispatch messengers to tell Hrolf that he can save his life if he kneels to Hjorvardh, but Hrolf answers like every good Viking king should: He extends his middle finger and tells his men to drink up.

“Let us take the best drink we have,” he called, “and be merry and see what kind of men are here. Let us strive for only one thing, that our fearlessness live on in memory—for hither indeed have the strongest and bravest warriors sought from everywhere about.” To the messengers: “Say to Hjorvardh and Skuld that we will drink ourselves glad before we take their scot.”

The next morning Hrolf and his 11 champions and the rest of his men issue from behind the walls to fight the enemy on open ground. The description of their charge is a sumptuous visual simile: “Along their ranks went that ripple as of wind across rye, which bespeaks a peak of training.”

Formed in a great wedge Hrolf’s men smash the enemy’s center, killing countless of the foe. Fighting in front of the press is a great red bear, which none recognize but is one of Hrolf’s men, Bjarki, fighting in bear form. Later Bjarki fights as a man, hewing shields, helmets, arms, and heads, his own arms bloody to the shoulder from killing.

Hrolf and his men have the early advantage, but their charge and crushing advance leaves them overextended and surrounded by the great mass of the enemy. Skuld summons a wolf-gray troll-boar the size of a bull, and later uses undead and a handful of shadowy monsters to attack the Danes.

The battle rages the entire day, and as night falls hope begins to fade. Great are the deeds of Hrolf’s champions, but the enemy are too many. Hrolf’s most trusted friend, Svipag the one-eyed, is thrown and slain by the boar, and Bjarki is gored and slain as he finally kills the beast. The circle of defenders around Hrolf inexorably closes. Grief-stricken by the impending death of his king and the end of the glorious reign he brought to Denmark, Hjalti speaks a lengthy set of staves, including the following memorable lines:

Let us die in the doing of deeds for his sake;
let fright itself run afraid from our shouts;
let weapons measure the warrior’s worth.
Though life is lost, one thing will outlive us:
memory sinks not beneath the mould.
Till the Weird of the World stands unforgotten,
high under heaven, the hero’s name.

At the end, his death at hand, Hrolf leaves the dwindling shield-circle and wades alone into the sea of foes until he too is slain. “Man after man he felled. No one of them slew him; it took them all.” 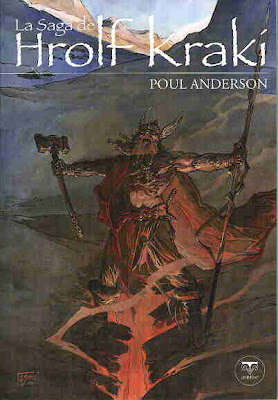 I heartily agree! This is one of my favorites!

I'm curious as to your other 9. There's one that I have always loved (not one of the obvious ones) that I believe you've read - and I wonder if it will make your list. I'll keep it to myself for now and see if it makes an appearance. If not, I might have to flip through the book (it's been a while) and argue my case :)

Great idea for a post, I'll be following these. I had sort of forgotten what a great battle 'Kraki' finished on, terrific stuff.

Falze: Care to drop any hints? I hope I don't incur your wrath by failing to mention your favorite battle.

Bill: Thanks for stopping by. I plan on having fun with this!

I don't know that it's my favorite, but one I really like. I'd have to peruse my collection to come up with a real favorite - if such is even possible. As for hints, I'll keep it mostly to myself. The combatants are not all human, though :)