Matheson’s I Am Legend falls short of classic status 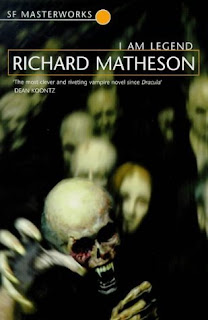 Warning—stop here if you don't want to be spoiled.

So I just finished re-reading (actually, listening to the audio version of) Richard Matheson’s 1954 horror novella I Am Legend, and for the second time I came away with the same reaction: Good book, worth reading--but a horror classic, top 10 material as I’ve frequently seen it praised around the Web? I’m not so sure, Stephen King.

First, let me state the obligatory and not undeserved praise for I Am Legend:

Now that that’s out of the way, I'll admit that I found I Am Legend a bit disappointing. Yes, I know it's acknowleged as a classic in the genre. Yes, I realize it's been adapted for the screen no fewer than three times. But even though it may cost me my "horror cred," I Am Legend for me is a bit overrated.

For starters, there’s not enough introspection and depth to the story. Robert Neville is the last man on Earth. Barricaded in his home and surrounded by vampires by night, he hunts the creatures by day while searching for a scientific answer to the virus that infected all of humanity. Such a tightly-focused, one character book has the opportunity to explore what it means to be a human, for example. It could have been a powerful statement against anti-conformity (Neville is the ultimate non-conformist, as he deliberately holds out against the living dead as the last living man on Earth).

But Matheson, in my opinion, opts for mere plot over substance, and I Am Legend is a lesser book for it. What we do get is a semi-interesting tale of survival and a man trying desperately to crack the code of the vampire virus, and not much else. It should have/could have been much more.

I’m the first one to praise short stories and lament their fading influence, but I Am Legend reads like a novella that should have been a novel. In short, it’s too short. There are some interesting, fertile concepts here that unfortunately aren’t played out. For example, I wanted to see more of the society being rebuilt by the “living” vampires who eventually exterminate their undead brethren. I would have liked more flashbacks to the collapse of society and scenes of the chaos of the virus spreading across the globe. Instead, Matheson provides only the briefest of glimpses. More than that, I wanted more introspection, more of what makes Neville tick. We’re given tantalizing glimpses of Neville’s humanity in his friendship with a dog, and in a budding romance with a female survivor. Again, these are unfortunately quite cursory. Matheson spends a lot of I Am Legend’s limited page count showing us the science of vampirism, a rather dry, unconvincing explanation I could have done without.

Another problem I have with the novella is that Matheson’s vampires aren’t particularly scary, and their behavior is inconsistent. They’re dangerous in hordes, sure, but how can we take seriously creatures that prove utterly incapable of breaking into a boarded-up house (if the garlic on the doors and windows are too much, couldn’t they knock a hole in its side)? Matheson also doesn’t sufficiently define their abilities and limitations, at least for my tastes. Are the undead vampires of I Am Legend possessed of mere animal intelligence? It’s unclear. At times, they are able to reason. For example, female vampires are capable of using crude sexual acts in attempt to seduce Neville into coming out of his home. Neville’s neighbor calls him by name, and in one scene anticipates Neville returning back home and circles back to wait for him. These are the actions of something more than animal. Yet the vampires are unable to come up with any plans more cunning than lobbing bricks at Neville’s house, and at times appear no more intelligent than Romero’s zombie hordes. Stoker's Count Dracula is scarier and far more capable than the bunch of them combined.

I’ll admit that the ending of I Am Legend is pretty brilliant. Matheson turns the vampire legend squarely on its ear with Neville’s realization that he, as the last man on Earth, has become a reviled creature of superstition and legend, personifying the myth of the ancient, blood-sucking vampire. He knows what it’s like to walk in the shoes of a hunted, misunderstood “monster,” and remains defiant until the end. I just wish the rest of the book measured up with its shattering conclusion.
Posted by Brian Murphy at 9:42 PM

This is a fair critique, certainly; but I suspect that the book is simply subject to the limitations of the market of its day. It was written at a time when this kind of book wasn't highly regarded and when most science fiction/fantasy/horror novels were fairly short.

Would Matheson have done better given more space? I dunno; he mostly wrote short stories. (Did he ever write anything else of novel length?)

Matheson doesn't do it through introspection, but in my opinion the whole book is an exploration of what it is to be human. To be human is to be defiant, to keep on hoping. And to keep on trying to love (the dog, the woman) even in the face of adversity.

It's all a matter of taste but I prefer Matheson's approach - I think the way he packed so many ideas into such a short space is a triumph. But sure, another author could have made it 600 pages long and be just as good.

Hey Will and Noisms, I don't want to leave the impression that I dislike I Am Legend--it's a good book, and one I enjoyed. I think it is an important book, particularly as inspiration for subsequent authors and filmmakers. But in my opinion it has been surpassed by books like The Children of Men and The Road.

"Matheson was, I think, the first to tackle the scenario of the last man on earth. It's a nifty concept."

Not to be a smarty pants, but Mary Shelley wrote The Last Man in 1826, exactly 100 years before Matheson was born. Although to be fair, both novels tackle the scenario in a completely different way: Shelley's book is the build up to the main character becoming the last man on earth, while Matheson begins his story with his character already placed as the last man.

But seriously, good to know, I've never heard of The Last Man.

Hi, couple weeks late here, but thought I'd comment as I as a big fan of the book as a young un'.

I think the title of the story itself explains a bit of Neville's seeming lack of deeper humanity and detail, and also the vampires seeming inability to rush in and kill him. Neville is the predator of the story. Predators rarely are given much intropection in fiction. Also, as cattle don't rush the lair of a mountain lion, the vampires fear of this predator keeps them from rallying enough courage to burst in on him. He comes at daylight to kill them as they sleep. He is the bogey man. You just lay and pray that tonight he doesn't come for you.

There are two kinds of vampires in the tale. Classic, wild and somewhat animalistic ones (much like the ones from the Will Smith movie) and the next evolution vampire - which In my theory are actually wild vampires who eventually calm down (I think partly through drugs they have)and basically become human again - they just don't think of themselves as human any more.

Good comments Brunomac. I do agree that Neville is the "predator" (a brilliant concept by Matheson, making him the feared outcast and the vampires the "normals"), and that the next evolution of calm vampires have reason to fear him based on his reputation.

But the animal-like vampires surrounding his house certainly don't seem to have any cause to fear him. They have, after all, managed to destroy or infect every other member of the human race. They appear motivated only by the need to destroy and consume. If they truly feared him, as sheep fear wolves, wouldn't they retreat? Why do they keep returning to his home, night after night?

In short, I don't get what makes Neville a survivor--didn't anyone else think to board themselves up in their houses with some garlic? Wouldn't there be enclaves of humans everywhere?

In short, I don't get what makes Neville a survivor--didn't anyone else think to board themselves up in their houses with some garlic? Wouldn't there be enclaves of humans everywhere?

The bacteria was airborne, not just passed via 'bite'. He only lived because he's immune for unknown reasons that he suspects are tied to the 'vampire bat bite' he once got.

Falze: Thanks, I must have overlooked that bit in the novel.