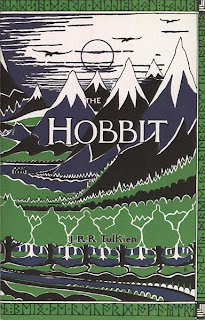 If there was ever a story meant to be read aloud, it’s J.R.R. Tolkien’s The Hobbit. Tolkien intended the tale to be delivered orally, and inserted an authorial voice into the text which imbues it with a lively, conversational quality. He himself read The Hobbit aloud for the Inklings, and countless parents have read it to their children.

If you could name someone perfectly suited to read The Hobbit, who would it be? Boomed by the deep-throated Orson Welles, perhaps, or intoned by the inimitable Christopher Lee? Narrated by the smoky-voiced John Huston, he of Gandalf fame from the Rankin/Bass animated film of The Hobbit? Sung by Hansi Kürsch of German power metal band Blind Guardian ?

While all of the above are great choices, arguably the perfect-sounding version already exists, delivered by veteran stage and screen actor Nicol Williamson. Originally released as a four LP vinyl record set by Argo Records in 1974 (now rare and expensive to obtain), you can listen to the entire recording courtesy of Youtube. It’s split up into 23 parts and is obviously a direct recording from the vinyl. There’s crackly record static, but that only adds to its wonderful atmosphere.

To read the rest of this post, visit The Cimmerian Web site .
Posted by Brian Murphy at 3:39 PM

Email ThisBlogThis!Share to TwitterShare to FacebookShare to Pinterest
Labels: The Cimmerian, The Hobbit, Tolkien

You had me sold up until the dreaded word..."abridged". Always sends me running in the other direction.

I think Jim Dale should read every audiobook.

Falze: It is unfortunately abridged, but in this case it's not so bad. I already know the story by heart, and the strength of the Williamson recording is its atmosphere.

Verhaden: Jim Dale... I'm not sure if I'm familiar with him. What has he read?

Damn, now that you mention Orson Welles, I really wish he read some REH. Heck, I'm positive he'd have made an epic REH adaptation, come to think of it: one of his horrors or weird menaces.

Well, Taranaich, Welles did play a Planet Destroying Monster from the depths of time and space once.

His last roll was the voice of Unicron in the 1986 Animated Transformers Movie.

So, He would have done very well as some sort of Lovecraftian Horror or CAS themed Necromancer as well I think.

Jim Dale is amazing. His readings of the Harry Potter books are better than watching the films. He does different voices for all. I'll pick up one of his audiobooks even if I've never heard of the book.

Yes, Jim Dale has narrated all of the Harry Potter books (US) and also provided the narration to a memorable but short lived TV show called Pushing Daisies. He's an accomplished stage actor in other respects.

There's both power and whimsy in his voice that's almost inescapable.

I'm enjoying this rendition of the Hobbit, however. Bilbo's accent sounds a bit forced, but Williamson's Smaug is delightful.

Trust me, Lagomorph, I'm well aware of Welles' final (and to my inner ten-year-old, greatest) performance.

With that in mind, I think he'd make a magnificent Xaltotun. He has the voice and magnetic stare.

Welles was a voice actor in The Transformers movie? Damn, might be time to look up a copy. I haven't watched that movie since, well, 1986 or so. I have a lot of good memories of the cartoon and the movie, however, and would fear spoiling them.

Transformers The Movie is a bit of a curate's egg: some fantastic animation, great voice acting (Leonard Nimoy! Robert Stack! Eric Idle!), one or two great lines, marred by a dire soundtrack (no, not even "The Touch" can save this for me) and basically wiping out the cast of the show in the first ten minutes. It was also Scatman Crothers' final role, which is just as depressing.

My little heart was broken seeing Prime, Prowl, Ironhide and Jazz being blown to smithereens, to be replaced by Kup, Hot Rod, Arcee and... sigh... Wheelie. How I loathed him. I actually felt antagonistic towards them, since as a precocious lad I knew they were being introduced to shill more toys. That's all well and good, but I guess they didn't account for the fact that kids got really attached to those characters.

Some time ago I stumbled upon a copy of this version and it is fun to listen to. I am not sure where it came from, but it doesn't have the sounds of a scratchy record, as this one does, it is smooth and easy to kick back and listen to...

I agree, Welles would have been Fantastic as Xaltotun.

And I'm in the same boat regarding the Transformers movie, Having missed seeing the show on TV, I mostly existed on my VHS set of the first season, which was actually and oddly enough all on VHS, and then the Movie.. So I watched the first 12 episodes to the point my VHS's were so grainy they wouldn't even play.. and then suffered through all the characters being killed off.

The Soundtrack is unfortunately 80's hair metal.. Covers of King Kobra, as performed by Kick Axe under a Pseudonym. But it does have Weird Al as well.. so thats something.

Killer recommendation! thanks a bazillion! Funny to think that, even abridged, this reading is longer than any movie (s) will be.