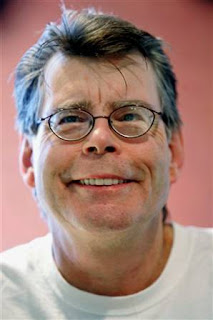 Writer Adam Christopher has embarked on a very ambitious project—reading and reviewing all of Stephen King’s books in the order in which they were published. He started a Web site dedicated to the task a couple weeks ago entitled Stephen’s Lot.

Christopher certainly has a massive task ahead of him. According to his Web site, King has written 56 books, including 46 novels, seven short story collections, and three works of non-fiction. Christopher also plans to intersperse his entries with reviews of film and television adaptations of King’s works and other King esoterica. To date he’s completed reviews of Under the Dome (which he’s calling Book #0—it’s King’s latest and out of order, hence the “zero” appellation), and has since reviewed Book #1, Carrie. Next up is ‘Salem’s Lot.

To read the rest of this post, visit The Cimmerian Web site.
Posted by Brian Murphy at 9:02 AM

Interesting. I might see what he has to say about a few more, but so far I'm underwhelmed after looking at Carrie. There's really no analysis of the book at all, you can get more of an analysis from some Amazon reviewers. Book report stuff at best. If his goal, however, is more of an analysis of King himself as a writer, then maybe he can wrap himself around the thin beginning of that in his Carrie review and take off from there...I guess it's hard to talk about the evolution of a writer if you're starting with the first book and the evolution hasn't started, yet.

Will he be able to finish? King might write them faster than he can review them!

Falze: Yes, I think one of his goals is also to look at how King evolves as a writer. We'll see. But yes, the report on Carrie was middling.

Eric: :). King isn't as prolific as he used to be but there is that possibility. In the 80's he was writing books as fast I could read them, it seemed.

I started with him with Carrie and Pet sematary,being this one of the best books I've read along with The ceremonies by T.E.D. Klein and The song of Kali by Dan Simmons. Cell is clearly the worst he has written. And It for me is not hismagnum opus as many people said, one friend couldn't finish it, but maybe the blame is in the translation Stephen King maybe is the author worst translated to spanish, people that have read it in english said that you lost a lot of the effect of his wrting with the traslation...
Francisco...