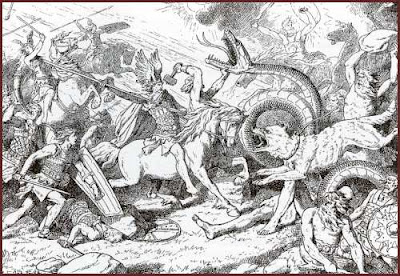 We will give our lives and let our world be destroyed, but we will battle so that these evil powers will not live after us.

—Odin, from The Children of Odin by Padraic Column

The Twilight of the Gods. The Doom of the Gods. Not just the ending of the world, but the breaking of the world. A final battle of order vs. chaos. A creation myth that explains our dim remembrances of gods and monsters and the chants of old heroes singing in our ears. A conflict that ended in fire and darkness and ultimate defeat for the greatest gods and heroes of an age—but took evil down with it.

I’m referring of course to Ragnarök, the epic battle of giants, heroes, gods, and monsters from Norse mythology. Although I’m not aware of one definitive treatment of the battle (for this post I’m drawing upon Snorri Sturluson’s The Prose Edda and Padraic Colum’s The Children of Odin), and it lacks the detail and narrative voice of the others on my list, for sheer scope, stakes, and iconic elements, it’s almost impossible to top, and so checks in at no. 2 on my Top 10 Fantasy Fiction Battles of all time.

Ragnarök. Heck, I even love the pitiless, hard sound of its name.

Ragnarök pits Giants, a wicked race which seeks to destroy the race of men, versus a pantheon of Gods who beautify the world and elevate its inhabitants. The battle is leant an extra degree of poignancy by the fact that Odin knows the Gods are going to lose. But victory is not their goal—they’re fighting to smash the enemy and not let them rule the world. Ragnarök is the essence of the northern theory of courage that J.R.R. Tolkien so loved: bravery and unshakeable resolve in a hopeless situation.

Ragnarök is preceded by three consecutive hard winters without a summer. Great battles rock the world, brutal conflicts pitting brother against brother in wars of destruction. Humanity is at its lowest ebb and can only be cleansed by fire:

Brothers will fight
and kill each other,
sisters’ children
will defile kinship.
It is harsh in the world,
whoredom rife
—an axe age, a sword age (and the sun rises)
—shields are riven—
a wind age, a wolf age—
before the world goes headlong.
No man will have
mercy on another.

Then comes the final battle. Heimdall, Watcher of the Gods and Warder of the Rainbow Bridge, sees the advancing host of foes and blows the Gjallarhorn. The Gods awaken and assemble. Valhalla opens its 540 doors with 800 champions ready to pass through each door. That’s 432,000 of the greatest champions, ever. The mind reels.

And that’s not counting the Gods themselves, the Aesir and the Vanir, the Asyniur and the Vana, the Einherjar and the Valkyries. I’ve always liked the thought of the Valkyries—fair maidens who collect the souls of the bravest warriors from the battlefield and take them to Valhalla on flying horses—engaging in the battle. They know the tremendous stakes involved in its outcome. The great host is resplendent in its war-gear and Odin rides in the vanguard. Writes Colum: “Odin rode at the head of his Champions. His helmet was of gold and in his hand was his spear Gugnir. Thor and Tyr were in his company.”

But the forces of evil are equally mighty—so mighty, in fact, that Ygdrassil, the World Tree whose roots are deeper than memory, is said to tremble. “And nothing, whether in heaven or on earth, is without fear,” writes Sturluson. The forces of evil include Surtur and his army of fire giants, Hrym and his host of frost giants, Jormungand, the midgard serpent, whose length encircles the globe, Fenrir, a wolf whose gaping mouth reaches from the ground to the sky, and Garm, the hound with the bloody jaws. The traitorous god Loki (whose father is a Giant and is thus allied with the forces of evil) leads into battle all of the dead from the realm of his daughter Hel. The rainbow bridge shatters and falls into pieces under their weight. The combat is fierce and apocalyptic. Fenrir slays Odin. Vidar, the Silent God, places his leather sandaled foot in its lower jaw and seizes the wolf’s upper jaw, then tears its head apart. Thor crushes Jormungand with a hammerstroke from Miolnir, but the serpent in its death throes spews its choking and blinding venom. Thor perishes (too soon for me, I wanted to see the thunder god pulverize some Giants with his hammer). Loki and Heimdall slay each other in single combat. Garm slays Tyr but is himself slain by the one-handed God.

The fire giant Surtur sets the world on fire with his blazing sword, evoking thoughts of some great nuclear holocaust. Surtur and his host are consumed in the fire. Ygdrassil is said in some versions of the story to go up in flames as well, perhaps symbolic of the passing of the spring from the earth. Others claim it survives and gives root to a new world from the ashes of the old.

The wolf Hati devours the Sun (Sol) and the wolf Managarm devours the moon (Mani). Stars fell and darkness came down over the world. Writes Colum: “The seas flowed over the burnt and wasted earth and the skies were dark above the sea, for Sol and Mani were no more.”

Eventually the earth springs green again and a new sun and moon arise. The death of the world paves the way for what could be a Christian creation myth: Corum writes of a new heaven above even Asgard. “Will and Holiness ruled in it.” Deep in a wood two of human kind are left, parallels to Adam and Eve. “A woman and a man they were, Lif and Lifthrasir. They walked abroad in the world, and from them and from their children came the men and women who spread themselves over the earth.”
Posted by Brian Murphy at 9:28 PM

Its a grim defeat with its own kind of glorious new victory at the end for men.

The mind reels at what you have for #1.

Checking in at no. 1 is a recap of the time I won Gauntlet, the video game. Man, that was awesome.

Better than Lord of the Rings RISK?