Breathing Life Into Dead Gods: The Allegory of Love by C.S. Lewis 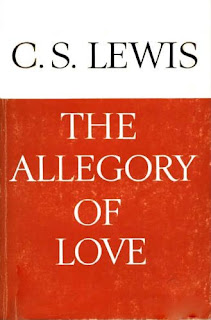 The old gods, when they ceased to be taken as gods, might so easily have been suppressed as devils: that, we know, is what happened to our incalculable loss in the history of Anglo-Saxon poetry. Only their allegorical use, prepared by slow developments within paganism itself, saved them, as in a temporary tomb, for the day when they could wake again in the beauty of acknowledged myth and thus provide modern Europe with its “third world” of romantic imagining.

–C.S. Lewis, The Allegory of Love

Tracing the roots of fantasy is a fascinating exercise. From whence did works of pure fancy spring? How far back do we go to find their source? Are its origins to be found in works like The Epic of Gilgamesh, or The Iliad and The Odyssey (for a great series of posts on the subject, look no further than Matthew David Surridge’s four part series Worlds Within Worlds ).

In his landmark study The Allegory of Love (1936), C.S. Lewis implies that fantasy’s roots lie not in the classical period, but the Medieval Age. Medieval poets infused “extinct” pagan gods with new life by employing them as allegory. Venus and Mars, Minerva and Jupiter, died and awoke again as concepts, sewing seeds that would eventually give rise to works like Phantastes or The Well at the World’s End.

Go back to the beginnings of any literature and you will not find works of myth and fancy, Lewis claims. Ancient writers wrote stories based on the probable, or events that they believed actually happened. Or they took the marvellous as fact, writing without irony about hippogriffs and sea-monsters. Purely fantastic fiction was unknown (classical poets employed allegory, but not in this manner). Pagan gods as allegory, and the acknowledgement of myth by medieval poets, marked a cosmic shift in artistic technique, paving the paths for writers like Spenser and Shakespeare and Milton and transitioning us to works of pure fantasy. “It is difficult for the modern man of letters to value this quiet revolution as it deserves,” writes Lewis. “Allegory may seem, at first, to have killed them; but it killed only as the sower kills, for gods, like other creatures, must die to live.”

Revelations and gorgeously turned bits of wisdom like these are only a few of the treasures to be found in The Allegory of Love.

To read the rest of this post, visit the Black Gate website.
Posted by Brian Murphy at 10:38 PM

I thought I had all of Lewis' works but I've missed or forgotten this one. Have you read Til We Have Faces? I need to revisit that.

Nope, I haven't read that one. I've really only scratched the surface of Lewis' writings.