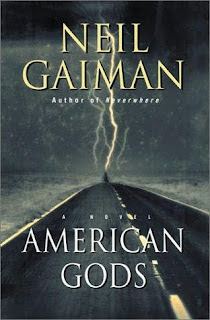 ****1/2 stars out of five
Part fantasy, part literature, part meditation on religion, part travelogue, part commentary on American culture, part murder mystery, part character study, Neil Gaiman's American Gods contains so many disparate elements that it is nearly indefinable; yet it is undeniably brilliant and nearly succeeds in pulling off all of its grand ambitions.
American Gods is first and foremost the story of a man named Shadow, who at the book's outset is just about to exit prison following a three-year sentence for assault. Shadow's world is soon rocked when he finds out that his wife is dead, killed in a car accident only days prior to his release. Flying home, he is approached by a large, bearded, one-eyed man named Wednesday, who turns out to be none other than Odin the All-Father, chief god of the Norse pantheon (props to those who know the derivation of Wednesday=Woden=Odin's Day). Wednesday hires Shadow to be his assistant in what we soon find to be a coming great war--a Ragnarok, if you will--between the old, dying, mostly forgotten gods of dozens of ancient cultures--Egypt, Japan, India, etc.--and the new "American Gods" of wealth, technology, television, sex, and more.
Odin and Shadow take to the backroads of the U.S. to enlist the old gods to their cause, and soon run afoul of the new gods and their hired guns. After a run-in with the assassins, Shadow goes underground to hide in an (too) idyllic town named Lakeside, a place with a dark secret--Shadow finds that a child has disappeared each year for the last 100 or more years, victims of a hungry, dark god who demands sacrifice. This is the mystery piece of the story.
In the end, we learn that Shadow is part of an elaborate scheme (manufactured by Odin) to get the old gods to join Odin's cause and start the war. Odin hopes for a great slaughter in the battle of new and old gods, a great blood-letting that will deliver the sacrifice he needs to regain his lost power. I won't spoil any more, only to say that Yggdrasil, the world tree, plays a role as Shadow becomes part of legend.
American Gods is an amazing book. Gaiman writes brilliantly about the nature of religion ("a vantage point from which man examines his life"), about death, and about what it means to live and find meaning. The portentously named Shadow is just that--a shadow of a man, a drifter and not a doer, who is representative (and perhaps an allegory) of 21st century man. Without religion or foundation, we drift like pale shadows, seeking answers and firm ground, but find none--especially not in the harsh, new "gods" of technology and flesh and violence, avatars that blaze with great brightness but burn out with equal rapidity.
My only complaint with American Gods is that Gaiman's scope at times feels too broad, and I was left with some questions and some loose ends that weren't adequately tied up. But it's a book that demands re-reading and one that I heartily recommend.
Posted by Brian Murphy at 8:32 PM

with a blog named "Silver Key" its a bit surprising that you missed out on the subtheme (theme?) of Silver vs. Digital Money (fractional reserve bookeeping entry).

American Gods is a Modern Day version of the Wizard of Oz
http://www.youtube.com/watch?v=7qIhDdST27g
and that's Oz as in Ounce of Gold.