Getting nostalgic for old school Dungeons and Dragons 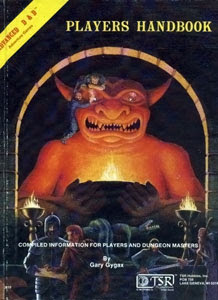 While surfing the boards today at RPG.net, a Web site devoted to role-playing games, I came across this ultra-cool link.

Click through, check out these fine old-school miniatures by Otherworld, and if you're of a certain shared background, I guarantee that you'll experience an intense bout of nostalgia. I did, as I was immediately (and pleasantly) assaulted with a flood of memories about first edition Advanced Dungeons and Dragons.
For those who haven't been following the game's progress, D&D is currently on version 3.5, and by the summer a fourth edition is due for release. Like 2.0, 3.0, and 3.5 before it, fourth edition promises sleeker rules, more options, and more "fun" than ever before. On most days I find talk of new rules and new versions of D&D a good thing, as it represents progression, a refinement of a rules-system that has brought me great pleasure since I started playing circa 1982 or so.
But not today. These old miniatures brought back the countless hours I spent with the old first edition books, aging tomes like the Players Handbook (the one with the gem-eyed, fire-lit, leering idol on the cover, above), and the Dungeon Master's Guide (the one with the three adventurers battling a towering, muscular, red-skinned efreet on the cover, with the fabled City of Brass floating over a flame-swept sea of oil on the back, below).
Role-playing games were simpler back then. Certainly there were rules (and first edition AD&D had its share of them, often byzantine and difficult to find in a pinch due to poor organization in the books), but when we didn't know a rule and couldn't be bothered to look it up, we simply made it up on the spot. Sure, we had impossibly high-level characters and ran "monty haul" campaigns in which +5 holy avengers and Axes of the Dwarvish Lords were scattered across the land, but it was fun. 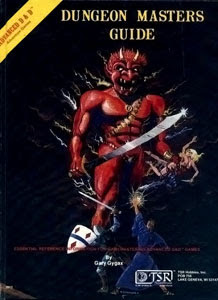 If this sounds like nostalgia talking, you're right. The games I play now are better, more focused, and more immersive. But I believe that it's more than just fond, hazy memories of childhood coloring my perceptions. Even though later iterations of the game are arguably better--cleaner written, with more coherent rules, and more options that allow for more character customization--first edition AD&D has it all over the later editions in one crucial aspect--flavor. The old books were far more evocative of adventure, of mystery, and of danger. Version 3.0/3.5, despite its superior rules, simply can't compete in this regard.
Here's an example. From the 3.5 Dungeon Master's Guide, page 7, "Style of play:"
The DM provides the adventure and the world. The players and the DM work together to create the game as a whole. However, it's your responsibility to guide the way the game is played. The best way to accomplish this is by learning what the players want and figuring out what you want as well.
Ho-hum. Essentially all the 3.5 rules are written like this: Dry, text-booky, highly accurate but devoid of color. Compare and contrast with the AD&D first edition Players Handbook, p. 109, "Successful adventures", written by the incomparable Gary Gygax:
Characters with stories related about their exploits--be they cleverly wrought gains or narrow escapes--bring a sense of pride and accomplishment to their players, and each new success adds to the luster and fame thus engendered. The DM will likewise revel in telling of such exploits...just as surely as he or she will not enjoy stories which constantly relate the poor play of his or her group! Some characters will meet their doom, some will eventually retire in favor of a new character of a different class and/or alignment; but playing well is a reward unto itself, and old characters are often remembered with a fondness and pride as well. If you believe that Advanced Dungeons & Dragons is a game worth playing, you will certainly find it doubly so if you play well.
If that doesn't make you want to grab a torch, a sword, a 10-foot pole, and head into the underdark, I don't know what will.
If you need further proof of first edition's greatness, go back to that link up above and click on that troll miniature. That menacing, hollow-eyed visage is--and always will be--Dungeons and Dragons to me.
Posted by Brian Murphy at 8:13 PM

Email ThisBlogThis!Share to TwitterShare to FacebookShare to Pinterest
Labels: Dungeons and Dragons, Role-playing

Spot on my friend...i do believe alot of it has to do with age...i enjoyed D&D alot more when i was younger. What was feasible and realistic when you were young, isn't so much when you get older.
But 1st Ed had the advantage of being first!...an exciting new world, that was simple and extremely fun to be in.
I started when i was 9 and was fortunate enough to be involved in a game that had an incredible DM. It felt so real to me that when my horse's life came to an end in a good ol' Orc battle, i had quite a sob!! : )
The latter versions have the headache of 'improving'? the game with more rules, e.t.c. but by trying to keep the excitement levels high. It's hard to do that these days as the rules aren't allowing the DM to use his discretion, hence him being forced into a box and the players aware of this, and becoming advisory DM's themselves through games. The DM should still be god, just make sure you get in with a creative and incredible DM...and when you find the recent editions of the game a bit dull...have a blast with the real mcCoy.