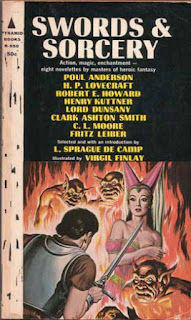 L. Sprague de Camp is not exactly known as a bastion of credibility among readers of Robert E. Howard. In his 1983 biography Dark Valley Destiny, de Camp combines research and first-person interviews with exaggeration and embellishment, speculation and psychological conjecture, and at times outright fancy to paint what is at best a suspect portrait of the man who brought us Conan, Kull, Solomon Kane and others.

Unfortunately de Camp is the only source (that I know of, at least) linking Howard with J.R.R. Tolkien. This comes via a recount of de Camp hanging out with JRRT in a memorably described encounter, as detailed in his non-fiction review Literary Swordsmen and Sorcerers: The Makers of Heroic Fantasy:
"We sat in the garage for a couple of hours, smoking pipes, drinking beer, and talking about a variety of things. Practically anything in English literature, from Beowulf down, Tolkien had read and could talk intelligently about. He indicated that he 'rather liked' Howard's Conan stories."
In J.R.R. Tolkien Encyclopedia: Scholarship and Critical Assessment by Michael Drout, de Camp adds the following explanation/equivocation of the above quote:
"During our conversation, I said something casual to Tolkien about my involvement with Howard's Conan stories, and he said he 'rather liked them'. That was all: we went on to other subjects. I know he had read Swords and Sorcery because I had sent him a copy. I don't know if he had read any other Conan besides 'Shadows in the Moonlight', but I rather doubt it."
I know I’ve always been hopeful but rather skeptical of the claim that Tolkien actually said he “rather liked” the Conan stories, given that the quote’s source is, well, de Camp.
But this sale which I recently found during a web search seems to provide proof that Tolkien at least read “Shadows in the Moonlight,” aka., “Iron Shadows in the Moon.” At the very least it provides concrete evidence that he owned the book, and that de Camp sent him the copy. Cool stuff. I can't help but wonder what Tolkien thought of this bit:
With a gusty laugh he lifted her to his fierce lips.
"I'll make you Queen of the Blue Sea! Cast off there, dogs! We'll scorch King Yildiz's pantaloons yet, by Crom!"
Posted by Brian Murphy at 9:10 PM

That is certainly pretty amazing.. to actually have proof of that.. since I always considered it rather spurious as well.

Of course this is only going to encourage that idiot on the Conan forums..

"that idiot on the Conan forums.."

I also consider DeCamp's saying anything spurious, but would YOU say 'rather liked' about anything and only have read one single pastiched-laced piece?

Having known, in my short time on earth, a good number of Britons of various ages.. having Tollers use the phrase "Rather Liked" to a direct question about something .. probably honestly translates into " I don't really remember which one it was you are talking about, but I will humour you, you loud Yank by feigning interest" when it comes to being seen to disagree with something.. and if the item was a gift.. it makes it even less likely he would voice any displeasure with it.


In other words I think he was just being Polite.


As for the Idiot.. well.. I mean.. Yeah.. there really is just the one that I can be referring too..

Like the rest of you, I'm just amazed to see this. It's not that I necessarily disbelieved de Camp, but he was known to exaggerate. This shows that Tolkien did actually receive the book. As far as Tolkien's take on Conan, it remains possible I guess that he read more than the one story (If he indeed read the one in the anthology). Unless a letter or something turns up, I guess we'll never know. Fascinating anyway.

Unless it was planted. I mean, Decamp probably knew that seventy years later we'd be hoping for this, and planted the book in Tolkien's library, made up the quote, and...

Well, you get the idea.

I haven't been on the Conan forums in more than a week. I'll check it out.

Of course this is only going to encourage that idiot on the Conan forums...

My ears are burning! :D

This was the exact sale I was going to use to bolster my theory on how de Camp's statement may well have been truthful, and I'm surprised you've only heard about this now. I could've sworn this was fairly common knowledge. I guess I have to get that Newcomer's Guide entry all typed up as soon as I can!

Having known, in my short time on earth, a good number of Britons of various ages.. having Tollers use the phrase "Rather Liked" to a direct question about something .. probably honestly translates into " I don't really remember which one it was you are talking about, but I will humour you, you loud Yank by feigning interest" when it comes to being seen to disagree with something.. and if the item was a gift.. it makes it even less likely he would voice any displeasure with it.

De Camp can be called a great many things, but a "loud Yank" is most assuredly not one of them. De Camp was an erudite, intelligent and eloquent scholar, and I see no reason to think that Tolkien simply humouring de Camp is any more plausible than genuine interest on Tolkien's part. In fact, given the fact de Camp viewed Conan as little more than a cash cow with zero literary merits, I wouldn't be remotely surprised if it was de Camp, not Tolkien, who then turned the conversation to other subjects. After all, de Camp was a very scholarly chap, and no doubt felt there were more important things to discuss with the legendary J.R.R. Tolkien than the creation of some Texas hack who happened to be popular with the rubes.

I say this with no great degree of malice towards de Camp, simply that given what I can discern, he just seemed far more interested in more "worthy" topics, and that if Tolkien & de Camp didn't have a longer discussion about Howard, then I don't see why one should immediately assume it was Tolkien who wasn't interested.

While that statement was meant to be humorous.. based on my own experience with elderly people in Briton.. You could be right, after all you would tend to know better than I since you would have more experience than I in that regard.

Unless your handle is Crom's bones.. you aren't the idiot referred to either.

I read these quotes of de Camp's sometime back, in some other tome reflective of Tolkien, but because I could not find the exact book in my collection, did an internet search, and found this site, and this interesting news.

I would not bother you all with a comment, but for something mentioned here, then seconded, about the phrase "rather liked," and it's supposed common, generic usage amongst the British.

I have had the great pleasure of knowing fairly well two elder Brits, both relocated here to the California coast, one of whom I worked with, the other being a daily customer from my days slinging coffee. The lady had been a child during the bombing of London, and the man had been at Oxford and had frequented the Eagle and Child. Both could speak intelligently on history and literature. I had a fantastic time speaking with them.

All of this is preface to the fact that both used the term "rather liked" fairly commonly, and both usually then expounded on the topic at hand (the very thing they "rather liked") for some time, showing off a good deal of interest and knowledge in that thing.

I suppose a Brit ought to know better than some kid from California, but this does not change my own direct experience, which was the exact opposite: "rather liked" really seemed to have meant "rather liked."

I suppose generalizations are a bad thing. They can especially be so when used to "prove" what we, ourselves believe about a thing, as they appeal to the abstract and require no solid evidence to back them up. I am no less suspicious of de Camp than anyone else. But I think this bears mentioning.

Anonymous: Thanks for the comment, and it's always good to hear a differing viewpoint.

Tolkien seemed to have been fairly outspoken on literature and fantastic literature in particular, especially if it differed from his taste. He also cannot have been wimpy about depictions of barbarity, given that some of his much-loved sources contained many gruesome and not very Christian occurrences. I don't mean to say that he thoroughly endorsed the tales, but he might very well have appreciated the sentiment and form.

I suspect Tolkien's reaction to Howard might have been similar to his mixed reaction to E. R. Eddison: