Looking for the real Robert E. Howard in One Who Walked Alone 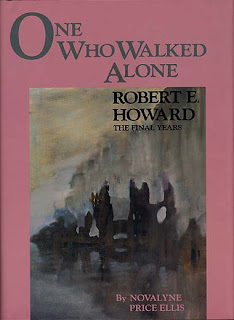 It couldn’t have been easy for Novalyne Price Ellis to write One Who Walked Alone: Robert E. Howard the Final Years (Donald M. Grant Publisher, Inc., 1986). Price Ellis’ memoir of her relationship with Howard (roughly 1934-36) is illuminating in its raw honesty. It’s also painful, at turns disappointing and downright frustrating. We might find escape in Howard’s sword and sorcery tales but there is none to be found here.

But above all, One Who Walked Alone is brave. Price Ellis never sacrifices accuracy to save face. Howard was a successful writer and a free spirit, and told wild, vivid stories, traits that Price Ellis found irresistible. But she was also painfully embarrassed with the Texan, unable to accept his occasionally odd public behavior. She was disappointed that he didn’t conform to her own conception of manliness and began to date other men, including one of his best friends, Truett Vinson, which cut Howard to the quick. While her reactions were understandable, at times I found her to be rather shallow and unlikeable. And yet rather than off-putting I find that uncompromising truthfulness highly admirable.

To read the rest of this post, visit The Black Gate website.
Posted by Brian Murphy at 10:30 PM

Very interesting stuff, Brian. I too was a bit taken aback by Novalyne's candour in regards to Howard's work and some of the more surprising moments that paint her in a far from favourable light, but as you say, that honesty is very admirable.

(Disclaimer: the following are my own thoughts and theories based purely on speculation)

Personally, I think the problem is that Novalyne was one of the most intelligent young women REH knew, but she wasn't an artist. She didn't have the same poetic drive & soul Howard did, and I think REH knew that. REH could talk to Novalyne about things he couldn't talk to just about any other girl with, but without reflecting poorly on her intellect, she just wasn't the genius Howard was. She was still preoccupied with social mores, didn't understand many of Howard's deepest beliefs, certainly not his work.

That's the tragedy of REH and NPE's relationship for me: NPE understood more than any other young woman, but she still didn't fully understand. NPE couldn't have saved REH, because she wasn't capable of saving him - and frankly, it's arguable if anyone on earth was capable of that.

Does that make sense?

Hi Al, yes, that theory makes perfect sense. Reading One Who Walked Alone its apparent that Price Ellis was taken with the idea of being an artist, but at heart wasn't willing to make the necessary sacrifices.

I don't think she understood REH until later in her life. In hindsight we know that REH was depressed, but I think it's too much to ask of Price Ellis to know about signs of clinical depression in 1930s Texas.

I also think that she was very young and had ideas in her head about how "real men" are supposed to act, and it wasn't until later that she found out how messy life really is. Howard couldn't be this amazing poetic genius and artist and still be like Truett Vinson and talk of the weather with other men on the street corner, like she wanted.

Robert Bly said, "By the time a man is 35 he knows that the images of the right man, the tough man, the true man which he received in high school do not work in life."

As you know from my TC writings, I like to think of the works of James Carlos Blake as the Big Novels that Howard never got to write. Next january Blake is releaseing "The Country of the Bad Wolfes," described as follows:

Two generations of Wolfe men—begat by an English pirate in New Hampshire in 1828—track their violent but manifest destiny through the Díaz regime in Mexico in the early 1900s and back to Gulf Coast Texas. The novel centers on two sets of identical "hero twins," each with a violent history that mirrors the author's belief in the primacy of violence in the evolution of civilization. Their lives are intertwined with important events through the history of the United States, beginning in the 1820s. Crucial are the histories of the infamous Saint Patrick's Battalion (revered in Mexico as "los San Patricios") who deserted the US Army during the Mexican–American War (1846-1848) and the rise and fall of the Porfirio Díaz regime (1876-1910), which marked the beginning of the Mexican Revolution.

I don't think she understood REH until later in her life. In hindsight we know that REH was depressed, but I think it's too much to ask of Price Ellis to know about signs of clinical depression in 1930s Texas.

Oh, I certainly agree on that: even professional knowledge on clinical depression wasn't what it is today. Short of calling Doc to borrow the Delorean, I don't think any one person could be capable of "saving" Howard except Howard himself.

I also think that she was very young and had ideas in her head about how "real men" are supposed to act, and it wasn't until later that she found out how messy life really is. Howard couldn't be this amazing poetic genius and artist and still be like Truett Vinson and talk of the weather with other men on the street corner, like she wanted.

Yes, exactly! Novalyne was still young, and I'd say both her and REH were still dealing with preconceptions of what men and women should be. Bly's quotation speaks truth. It reminds me of something a primary school classmate said: "I blame Disney for my high expectations of men."

Awesome to see you too, Jim!

Thanks for stopping by, Jim. That definitely sounds like something Howard would have written one day.

Al: Good point about REH struggling with the definition of a man, too. He was proud to be a writer and earn his keep from his typewriter (when he actually got paid on time, that is), but he was also acutely self-conscious of not conforming to society's expectations.

So, you've read Iron John, Brian? Great book, with a lot of insight for those of us struggling to be adults, in a world that values only teenagers.

No, I have not read Iron John, Eric. Sounds interesting though.