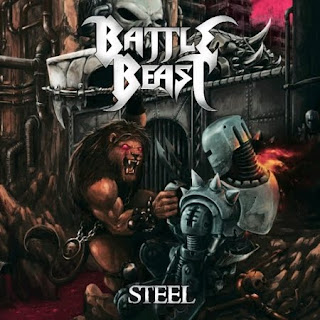 Heavy metal has always been my favorite genre of music. My listening tastes do include other genres, from country to the oldies to mainstream pop/rock, but in the end I always find myself circling back to metal (at one time I wondered if the psychologists/ sociologists who view metal as a symptom of adolescent rebellion were right and that I’d “grow out of” it, but at the ripe old age of 37 I’m proud to say I don’t ever see that happening. Rock on, whimps and posers leave the hall!)

And yet there are times when my enthusiasm for metal wanes. It usually involves events around the aging and mortality of the metal legends that I grew up with. For example, Judas Priest announcing their farewell tour and KK Downing hanging up his axe, Iron Maiden sounding tired on their new album, and of course, the worst news of all, Ronnie James Dio dying from stomach cancer. On my worst days, I think metal will go the way of grunge, leaving fans like me with naught but memories of leather-clad lead singers and a lingering case of tinnitus.

New metal acts are hitting the scene every day of course, particularly out of Europe, but I don’t like most of them. I actively despise nu metal acts like Korn and Limp Bizkit (I had to force myself to actually type “nu metal”), while black metal/death metal and its growling, cookie-monster style vocals just don’t cut it for me. That’s why for all the praise I’ve seen heaped on them I can’t get into Children of Bodom, for example.

But once in a while a new band emerges that gives me hope, bringing new blood into the genre while preserving the old “classic metal” or “power metal” sound that I enjoy. Bands like Blind Guardian and Edguy. The latest is a band called Battle Beast, a group of young Finns who just put out their first album, Steel. I also found out that they’ll be at the Wacken Open Air festival in August, a major event which not just any old metal band gets invited to play.

Here’s my favorite Battle Beast track, "Armageddon Clan". The lyrics are straight out of The Terminator.

"Show Me How to Die" is pretty awesome, too.

One of the things that attracts me to metal is the soaring vocals, which is why Maiden, Priest, and the Dio-fronted Black Sabbath are my favorite bands, and why I’m partial to Blind Guardian and Edguy. That’s also why Battle Beast has grabbed my attention. Should one hear a blood-drenched Valkyrie singing on the fields of some ancient northern battlefield, I would imagine it would sound a lot like Battle Beast’s frontwoman Nitte Valo. She can really belt it out.

I’m not saying these guys are the next coming or anything, but they’ve got a sound I enjoy and an old-school vibe pleasing to the ear. Plus a cool album cover.
Posted by Brian Murphy at 9:22 PM

Have you ever listened to TYR?

I've been trying to find other new groups like them, but have no yet succeeded.. They can be a tad provocative on their videos but not as much as some other groups like Rammstein..

From the bands you list, am I right to guess you aren't into Tool? To me they are the best metal out there today. The first A Perfect Circle album was amazing, too.

Lagomorph: No, I haven't listened to Tyr. Their name sounds promising, though.

Ted: Yeah, I'm not a big Tool fan. Again, I know how popular they are and well-regarded critically, but they're just not my cuppa...

To me Tool doesn't even sound like a metal band. That's not a knock on their talent, but I think of them as a forerunner of that "post-metal" sound that gets hyped by sites like Pitchfork - alt-rock bands that use metal riffs in their songwriting.

In the U.S. and Canada I've been impressed by Cage and 3 Inches of Blood recently. Pharoah isn't bad. And there are still older bands like Slough Feg and Helstar that are releasing good music through the underground.

I'm going to have to try these guys out. If your looking for a bit of something to try give Hammers Of Misfortune, The Lord Weird Slough Feg, and Enslaved a try. All are interesting takes on metal without falling into the dreaded 'nu-metal' catagory...

It isn't metal, but check out Al Andaluz Project — as the name suggests, it's Arab medieval music from the era of the Moorish occupation of Spain and the Reconquista. Really beautiful and great background music for certain REH stories.

Thanks for the suggestions, all. I'm always on the lookout for new listen.s

Check out Tyr, they're pretty good. Thanks for the tip on Battle Beast. Oh, have you heard of Cage? Look for the song 'I Am The King', I think you'd like it.

I have to put in: I got this album based on your review, and I must say, it is suitably awesome and, most important of all, *fun*.

I have to put in: I got this album based on your review, and I must say, it is suitably awesome and, most important of all, *fun*.

Nice! My work here is done.