I’m an Elvis man when it comes to zombies 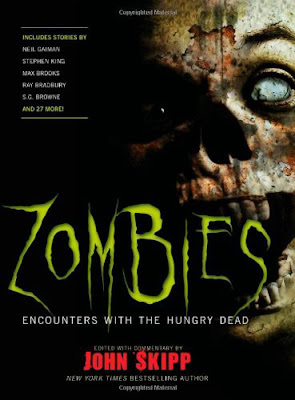 It’s often been said—I believe the saying originated with the film Pulp Fiction—that you’re either an Elvis man or a Beatles man. You can’t be equal parts fan of the larger than life King of Rock and Roll and his bombastic, hip-shaking style, and love the cerebral, trippy sounds of the Fab Four with equal fervor (though apparently the Beatles were themselves big Elvis fans—go figure).

Whether or not you buy into the theory I think it can be profitably applied to the dual nature of zombie fiction.

Zombies are certainly malleable monsters and can represent concepts like out of control consumerism, or the dangers of conformity, as well as mortality, cancer, and other real-life issues. Zombie literature can be "literary," in short. But in the end when I pick up a zombie anthology I want mostly stories about flesh-eating undead overrunning the world, and humans stubbornly fighting back. World War Z by Max Brooks is still the high water mark for this type of zombie fiction. If you’re going to publish an anthology about zombies, the stories ought to have a lot of red meat and apocalypse to them. Deep literary and/or philosophical subtlety? Yeah, zombie fiction can do that too, but I prefer a little less conversation and a little more action in my zombie stories. Literary is okay in smaller doses.

Fortunately Zombies: Encounters with the Hungry Dead (edited by John Skipp) contains enough Elvis to scratch my rock-and-roll itch. It doesn’t warp the term “zombie” beyond all recognition, as does the John Joseph Adams anthology The Living Dead, which features a few stories with no zombies at all and lots of ham-handed political commentary. There’s a little of that here (Lisa Morton’s cartoonish “Sparks Fly Upwards”) but not enough to be a deal-breaker. Zombies: Encounters with the Hungry Dead contains 32 short stories by such luminaries as Stephen King, Robert Bloch, and Ray Bradbury, as well an introduction by Skipp and two concluding essays on the history of the zombie genre and the reasons for its enduring popularity. Checking in at 700 pages, the book is so thick it “can also be used for staving in heads,” proclaims a back cover blurb. I believe it.


Some of the best stories include “The Great Wall: A story from the Zombie War,” by Brooks. Left on the World War Z editing floor, it’s a fine little story about China’s struggles with the zombie outbreak and its efforts to contain the undead hordes by successfully rebuilding the country’s great wall, albeit at great human cost. Good stuff. Joe Lansdale’s “On the Far Side of Cadillac Desert with Dead Folks” is an absolute gonzo page turner. Lansdale almost never lets me down; the guy is just a great storyteller (I will keep saying that until someone listens). This story has it all, including a religious cult that sanctifies promiscuous sex, headed up by a whacked-out priest who flays men alive in an attempt to discover the secret of eternal life. “God Save the Queen” is another favorite, a ferocious condemnation of the British monarchy and a warning about the decay of morality and respect for human life in the modern age.

Zombies: Encounters with the Hungry Dead contains a few stories that stray a little too far into Beatle territory for my tastes. “Bitter Grounds” by Neil Gaiman was such a one. I like Gaiman (I adore American Gods, and The Sandman is pretty cool) but “Bitter Grounds,” while well-written, did nothing for me. Apparently it’s making the rounds in just about every zombie anthology published these days but I'm not getting the love: it reads like a tiring, over-extended metaphor about a man who is dead inside/dead to the world/just plain dead, and shuffles along rather than soars. “The Quarantine Act” was another story that was well-written but wasn’t what I was looking for here; too much commentary on personal freedoms vs. the greater good of society and not enough zombies, which are relegated almost entirely to the background.

“Lazarus” by Leonid Andreyev (written in 1906 and translated from the Russian) is a great example of how a quiet zombie story can work. Just like his biblical counterpart the Lazarus of the story returns from the dead, silent and a little bit ripe under the collar. But he returns not as a Romero style flesh-eating zombie, but as a man who has seen the other side, the dark empty void of death. Though he’s sought out by the curious and the brave, no one, no matter how mighty or self-assured, can stand the gaze of Lazarus for long. It’s quite sobering, disturbing, and well-done.

I was glad to see a half-dozen stories from Skipps’ seminal but out of print Book of the Dead reprinted here. I once held a used copy of the Book of the Dead in my hand as a youth and foolishly decided to put it back on shelf. It disappeared soon after. Zombies gave me a second chance at the best stories from that collection. One of these, Robert McCammon’s “Eat Me” (by far the best title in the book) attempts something I thought I would never see in print: zombie sex, and a love scene that manages to be both poignant and an utter gross-out. McCammon gets my praise for artfully pulling it off. There’s plenty here for gore fans, the best (or worst of which, depending on your perspective) is Carlton Mellick’s “Lemon Knives ‘n’ Cockroaches,” which is so graphic I don’t dare describe it here. The lines between human and zombie are completely erased in Mellick’s tale.

Overall this is a must for zombie fans.
Posted by Brian Murphy at 11:17 PM

Speaking of Lansdale-my first thought at seeing your title was Bubba Ho-Tep.