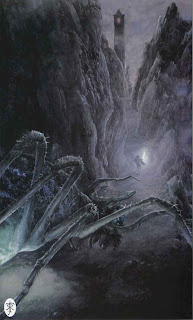 He may not be Steven King or Edgar Allen Poe, but J.R.R. Tolkien manages to pack a couple scares into The Lord of the Rings. Two chapters in particular send a chill down my spine: One is the "Passage of the Marshes," which I discussed in a recent post, and the other is "Shelob's Lair."

Re-reading this latter chapter made me remember how loathsome a monster is Shelob. She is truly horrifying, a monster that makes Pennywise's true form in King's It seem like a daddy longlegs in comparison. She is old, old enough to darken Middle-Earth before Sauron arrived on the scene, and bloated from drinking the blood of Elves and Men. Tolkien says she cares not for wealth or power, but spends all her time brooding on her next feast. "For all living things were her food, and her vomit darkness," he writes. That's about as nasty and explicit as Tolkien gets.

More dreadful is the knowledge that Sauron knows of Shelob and feeds it with orcs and prisoners:

And sometimes as a man may cast a dainty to his cat (his cat he calls her, but she owns him not) Sauron would send her prisoners that he had no better uses for: he would have them driven to her hole, and report brought back to him of the play she made.

"Play she made?" Jesus, I don't know what's worse--being paralyzed with poison and eaten alive by a monstrous, reeking, millenna old spider, or the thought of Sauron listening to such tales with glee.

Tolkien does a masterful job building up the horror in "Shelob's Lair," primarily by engaging other senses than sight in the reader, particularly smell. As Sam and Frodo approach Torech Ungol (Shelob's Lair), they catch scent of its foul reek, "as if filth unnameable were piled in the dark within." This is a rancid, foetid stench that can only belong to some great, millennia-old carnivore.

Inside Shelob's lair the air is still, stagnant, heavy, and any sounds Frodo and Sam make fall dead. It is pitch black, so dark you cannot see your hand though you hold it inches from your face. The evil and foulness are palpable, and Tolkien describes how a great fear and dread is upon the hobbits, though they do not know its origin. The oppression is so great that Sam and Frodo clasp hands in the darkness.

Our first encounter with Shelob not visual, but conveyed through her awful sounds, described by Tolkien as, "Startling and horrible in the heavy padded silence: a gurgling, bubbling noise, and a long venomous hiss." Then come the eyes, two great clusters of many windows. "Monstrous and abominable eyes they were, bestial and yet filled with purpose and with hideous delight, gloating over their prey trapped beyond all hope of escape."

When Tolkien finally draws aside the curtain for the big reveal, Shelob is every bit as noisome as my mind had prepared her to be. I think there's something particularly hideous about spiders as a species, and Shelob is truly the worst:

Hardly had Sam hidden the light of the star-glass when she came. A little way ahead and to his left he saw suddenly, issuing from a black hole of shadow under the cliff, the mostly loathly shape that he had ever beheld, horrible beyond the horror of an evil dream. Most like a spider she was, but huger than the great hunting beasts, and more terrible than they because of the evil purpose in her remorseless eyes. Those same eyes that he had thought daunted and defeated, there they were lit with a fell light again, clustering in her out-thrust head. Great horns she had, and behind her short stalk-like neck was her huge swollen body, a vast bloated bag, swaying and sagging between her legs; its great bulk was black, blotched with livid marks, but the belly underneath was pale and luminous and gave forth a stench. Her legs were bent, with great knobbed joints high above her back, and hairs that stuck out like steel spines, and at each leg's end there was a claw.

Sam's confrontation with Shelob is also one of my favorite scenes, and it is here and in his actions subsequent to Frodo's poisoning and capture that he emerges as a great hero in the rolls of fantasy literature. 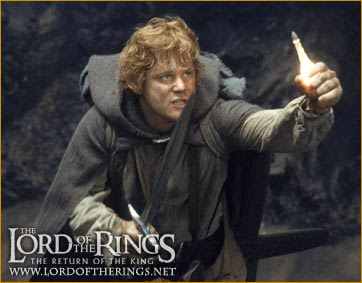 Am I correct in thinking I remember Shelob being in The Silmarillion? Or have I continually been making that mistake in my head? Do you recall?

No, Shelob is in The Two Towers (and in the Jackson films, The Return of the King).

You're thinking of Ungoliant, who spawned Shelob. Now that was a giant, nasty spider.

Yeah, that's it. I thought I recalled a spider through the haze of names and some sort of vague story that is The Silmarillion. Couldn't remember if it was one and the same spider.

I hope, for the sake of intellectual consistency, that you also shower such scorn upon nebulous and name-ridden fantasy soap operas like GRRM's Westeros door-stoppers and Erickson's ponderous Malazan tomes.