Through hell and into a vision of heaven: The journey of the Fellowship continues 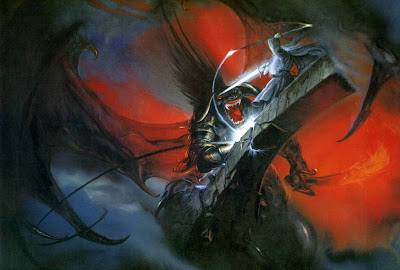 The world is grey, the mountains old,
The forge's fire is ashen-cold;
No harp is wrung, no hammer falls:
The darkness dwells in Durin's halls;
The shadow lies upon his tomb
In Moria, in Khazad-dum.

So I have made it with the company (sans Gandalf) out of the long dark of Moria and into the golden wood of Lothlorien. The Great River and Amon Hen awaits.

In re-reading these scenes I was struck by their marked contrast, placed as they are by Tolkien back-to-back in the narrative. We literally go from "A Journey in the Dark" to the golden wood, from pitch-blackness into pure light.

Moria
Moria is a vision of hell, full of darkness and pits and of course, the fiery demonic Balrog. But it's also a proving ground, a place through which the fellowship must pass if they are to reach their ultimate goal. Even the bravest members of the Fellowship quaver at the thought of entering its gates, but you can argue that they emerge stronger, wiser, and more determined to reach their goal than ever. This resonates with me strongly: Don't we all have dark paths to trod, a fearful and unwanted voyage through the darkness that is nevertheless necessary if we're to reach our ultimate goal?

Some of my recent favorite scenes/remembered moments from Moria include:

The Watcher in the Water took Oin, according to the record of the fortunes of Balin's folk, the great damaged tome found by Gandalf in Balin's tomb. What an awful way to go for this jovial dwarf from The Hobbit, grasped by a writhing mass of tentacles and likely consumed beneath the dark waters at the Westgate.

The scaly green arm of the cave troll thrust through the door. Unlike the film version, which featured a wild battle against this monster, Tolkien gives us only a glimpse of the beast: A huge arm and shoulder, with dark skin of greenish scales, was thrust through the widening gap. Then a great, flat, toeless foot was forced through below. Frodo stabs the foot with Sting, forcing it back with a bellow, and we never hear from the creature again.

This description of orc laughter: There was a rush of hoarse laughter, like the fall of sliding stones into a pit. Tolkien can occasionally terrify, and this dark simile could be taken from a Stephen King novel.

Gandalf's struggle with the Balrog. Not at the bridge of Khazad-Dum (which is also a great scene), but previously, at the barricaded door of Balin's tomb. Gandalf uses a spell to hold the door and encounters a terrible force of evil will opposing him, one that is actually (and terrifyingly) stronger than his own: What it was I cannot guess, but I have never felt such a challenge. The counter-spell was terrible. It nearly broke me. For an instant the door left my control and began to open!

Gandalf is mighty but the Balrog is one mean dude. Fortunately the door shatters and the chamber collapses, else Gandalf may have lost this battle of wills and magic. He is later put to the ultimate test in the pit, of course.

Lothlorien
After Moria the fellowship enters Lothlorien. Whereas Moria is hell, the golden wood is heaven, the Garden of Eden before the fall. Tolkien writes that evil's influence is felt everywhere in Middle-Earth but not in the land of Lorien. This is the heart of the ancient realm, a last, timeless bastion of the elder days: No blemish or sickness or deformity could be seen in anything that grew upon the earth. On the land of Lorien there was no stain. Aragorn says that no evil in this land "unless a man bring it hither himself."

Yet even paradise is tinged with melancholy in Middle-Earth. If no sickness touches the earth here, the elves know it cannot last. Says Haldir to Merry: Some there are among us who sing that the Shadow will draw back, and peace shall come again. Yet I do not believe that the world about us will ever again be as it was of old, or the light of the Sun as it was aforetime.
Later Galadriel tells the company of her and the Lord Celeborn's long struggle against the darkness. "Together through ages of the world we have fought the long defeat," she says. This is hardly encouraging stuff, but its a point worth repeating and one overlooked by Tolkien's detractors, many of which criticize The Lord of the Rings for its fairy-tale ending. They are wrong. The war against darkness cannot be won, Tolkien wrote. Light is only granted a reprieve.

Winning the war against Sauron will start the march of Time and drive the magic from the world, Galadriel explains. This is Tolkien's view of progress as a double-edged sword: Root out evil and it is replaced by a more prosaic, banal form of evil, perhaps because there is no more need for heroes to stand against the dark.

Galadriel has the power to see into men's hearts and she searches each of the Fellowship with her mind, probing for their true motivations. "Yet hope remains while all the Company is true," she says. Her observation proves correct: Frodo cannot reach Mount Doom and destroy the Ring on his own. Even though the Fellowship breaks, Frodo's staunch companion, Sam, does not. He is Frodo's only "company" in the final stages through Mordor, and ultimately (in my opinion) proves to be the true hero of The Lord of the Rings.

Fair though it may be beyond surpassing, Lothlorien is unfortunately only a respite for the fellowship, whose course leads east. 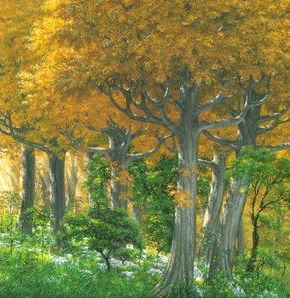 The "long defeat" is one of my favorite themes from The Lord of the Rings and the place where the underlying religious themes of the novel is most clear. As I get older, I find more and more affinity with that worldview and my appreciation for Tolkien's insight grows accordingly. Lothlorien haunts me on some days and I am glad of it.

Another very interesting post, Bryan. The more of your musings I read, the more excited I get about my own, imminent, re-reading of this wonderful tale.
James makes an interesting point in that I believe Lord of the Rings is a story that grows with you. As you read it subsequent time throughout your life, different themes become more apparent and significant. The 'long defeat' certainly falls into this category. As a young reader, this was a theme that either passed me by completely or only barely registered. Now that I am older and have experienced much more of life's twists and turns, such a theme is glaringly obvious. Balancing this darkness is the new light in which I see the relationship between Frodo and Sam, particularly the nobility of spirit embodied by the latter.

Hi James, yes, in many ways we are all of us fighting the long defeat. There are so many ways to look at this: The long defeat can be the span of a life, with the darkness of the grave at the end, but many victories and points of light on the journey. We mortal men are all "doomed to die"--but there is also hope that there is something beyond the "great grey rain-curtain" of this world.

Sacha: I agree, and my feelings about the long defeat have certainly changed in subsequent readings.

It's a very interesting take on a Heaven/Hell relationship in the LotR. Lothlorien would definitely be an ideal heaven-esque place for me as well.

I really always liked the part in the book where the cave troll *tried* to come in, but the group repelled it. For some reason, it made the fight in the book scarier than what was portrayed in the movie.