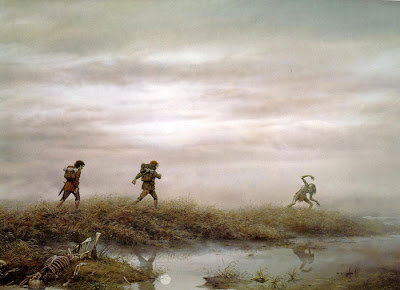 War must be, while we defend our lives against a destroyer who would devour all; but I do not love the bright sword for its sharpness, nor the arrow for its swiftness, nor the warrior for his glory. I love only that which they defend.

Although regarded as high fantasy (and thus conflated with "escapism," often by those who should know better), J.R.R. Tolkien's The Lord of the Rings is also a treatise on war. Books 3 and 4 of Tolkien's tale (The Two Towers) shift the focus of the story from that of the adventures of the Fellowship to a broader conflict brewing in Middle Earth. The company emerges from the dark pit of Moria and the bright woods of Lorien only to be swept up in the machinations of Saruman and the great battle at Helm's Deep.

In my re-reading of The Lord of the Rings I recently passed through the vast bogs and fens which lie between the Emyn Muil and Mordor. This wide stretch of trackless, treacherous land is home to the Dead Marshes, named for the spectral corpses of fallen men, elves, and orcs that lie beneath its muck and dark waters. At one time their bodies lay on the dry Dagorlad, the site of a great months-long battle of the second age of Middle Earth. In this battle the Last Alliance of elves, men, and dwarves fought Sauron's forces at the gates of Mordor. The forces of good prevailed as Isildur cut the One Ring from Sauron's hand, but only after tremendous loss of life on both sides. Gradually the swamp spread, covering the land and the bodies of the slain.

Tolkien wrote in a letter that he drew his inspiration for the landscape of the Dead Marshes from experiences in the Somme, but it's no great stretch to speculate that this terrible battle made an impact in other, more profound ways on The Lord of the Rings. In the first day of the Somme the British suffered their worst loss of men in a single day in British history; 57,000 casualites, including 19,000 young men whose lives were snuffed out like candles in a hail of German machine-gun fire and shrapnel. Among those to die in the Somme were Tolkien's good friends Rob Gilson and G.B. Smith (for a compelling and complete recounting of Tolkien's wartime years and its influence upon his writings, I heartily recommend Tolkien and the Great War: The Threshold of Middle Earth, by John Garth).

In the Dead Marshes Frodo, Sam, and Gollum come face-to-face with death as the great fear--that it is simply the end, and that there is no immortal soul. Our lives are simply snuffed out when our bodies fail or are destroyed. All men, good and evil alike, are mingled together in the common lot of corruption, the grave, where good deeds in life are not rewarded by the eternal hereafter--because there isn't one. The images of the dead in the pools reflect this horror, notes Frodo:

They lie in all the pools, pale faces, deep deep under the dark water. I saw them: grim faces and evil, and noble faces and sad. Many faces proud and fair, and weeds in their silver hair. But all foul, all rotting, all dead. A fell light is in them.

In another passage from The Two Towers that I had forgotten, Sam, Frodo, and Gollum manage to find a brief respite in the land of Ithilien, still fair and flowering even though it has fallen beneath the shadow. But this peace is only an illusion, a respite: When Sam leaves the path to examine the trees, he stumbles on a ring still scorched by fire, and in the midst of it finds a pile of charred and broken bones and skulls.

Tolkien witnessed too much of this senseless loss of young life in his experience during the Somme, which explains why death weighs heavily on his mind in The Lord of the Rings. Elves alone have the gift of immortality, but men are mortal and "doomed to die." As men dwindle from the greatness of their elder days so too are their lifespans reduced.

Yet The Lord of the Rings is also infused with heroic men and martial victories. Garth posits that Tolkien did not believe that the sacrifice of young men's lives was a waste, if given for the right reasons. Writes Garth: "It [The Lord of the Rings] examines how the individual's experience of war relates to those grand old abstractions; for example, it puts glory, honour, majesty, as well as courage, under such stress that they often fracture, but are not utterly destroyed."

Tolkien personified his feelings about concepts like glory, honour, and courage in the peoples of Rohan. Rohan is at constant war with the orcs and wild men, and like the Dunedain must remain ever alert, guarding against encroaching evil. They believe that death on the battlefield, while sorrowful, is never in vain as long as their acts are remembered. Thus the wistful (and my personal favorite) bit of Tolkien poetry, the Lament for Eorl the Young:

This piece captures Tolkien's ambivalent feelings about war. The poem on the one hand portrays the magnificence of Eorl, resplendent in his war gear and the full flower of his years, using the symbolic language of spring and harvests and growing corn. But the song also mourns his death, asking again and again "Where has he gone?" in a question that cannot be answered. Eorl's passing leaves no trace, like a whisp of smoke. For the living only his memories remain.

The Riders of Rohan remember their dead with songs like these and through the simbelmyne, a small white flower which grows on their graves and tombs. According to the Encyclopedia of Arda, "simbelmynë is translated as 'Evermind': a reference to the memories of the dead on whose tombs the flower grew."

Tolkien does not take war lightly and the men of Rohan, though portrayed in a sympathetic light, are not his ideal. That place is held by Faramir, Tolkien's portrayal of man at his best. Faramir sees war with a keen eye, and tells Sam and Frodo that the high men of Numenor, of which he is a descendant, have "fallen" and are becoming like the Rohirrim, loving valor for valor's sake: "Yet now, if the Rohirrim are grown in some ways more like to us, enhanced in arts and gentleness, we too have become more like to them, and can scarce claim any longer the title High...For as the Rohirrim do, we now love war and valor as things good in themselves, both a sport and an end."

Tolkien's clearest view on war is revealed in a famous passage in which Sam views the body of a dead soldier from the south, slain at his feet by arrows from Faramir's men in the woods of Ithilien:

He was glad that he could not see the dead face. He wondered what the man's name was and where he came from; and if he was really evil of heart, or what lies and threats had led him on the long march from his home; and if he would not really rather have stayed there in peace.

In other words, war is terrible and of last resort, and slain foes are, in the end, just men--and therefore to be pitied. War is necessary when "destroyers" like Sauron or Hitler would impose their will on the free peoples of the world, but it is a duty to be carried out, not glorified. It brings with it too much death and sorrow. In his famous foreward to The Lord of the Rings, Tolkien wrote:

One has indeed personally to come under the shadow of war to feel fully its oppression; but as the years go by it seems now often forgotten that to be caught in youth by 1914 was no less hideous an experience than to be involved in 1939 and the following years. By 1918 all but one of my close friends were dead.

Tolkien never forgot the loss of Gilson and Smith, nor the Somme. At some level it fed into his passion for language and myth, providing fertile ground for a great tale. We have The Lord of the Rings to thank.
Posted by Brian Murphy at 8:28 PM