"And the joy of battle was upon me": My favorite moments from the battle of the Pelennor Fields 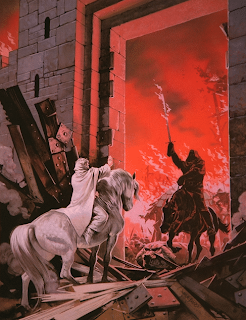 My passion for this book is due in large part to the battle of the Pelennor Fields. There's so many poetic, inspiring sequences that occur during the battle that it's difficult to mention them all without simply re-typing entire chapters. I'll try to restrain myself and mention a few of my favorites:

Orcs flinging heads of slain Gondorians over the walls of the city. I liked this chilling touch by Tolkien as it adds an additional streak of unexpected cruelty to the orcs. "They were grim to look on; for though some were crushed and shapeless, and some had been cruelly hewn, yet many had features that could be told, and it seemed that they had died in pain; and all were branded with the foul token of the Lidless Eye." This reminded me of the old medieval battles in which corpses were pitched over city walls in an attempt to breed disease among the beseiged populace. Only here the heads are thrown to break Gondor's will.

The trenches of fire. Tolkien never explains how the orcs accomplished this feat ("though how it was kindled or fed, by art or devilry, none could see"), but its a great visual image and needs no explanation. Something about this detail reminds me of modern warfare, as the great flaming trenches are the ancient equivalent of shell-holes and the leaping flames of artillery blasts, perhaps.

Dread and despair of the Nazgul. Fear is the Nazgul's chief weapon. As a combat veteran, Tolkien understood that winning and losing in battle depends more on mastering your fear and hoping that your enemy's nerve breaks first, rather than inflicting huge casualties. His inclusion of the Nazgul, and Gandalf tirelessly walking the walls of Gondor rallying men from despair, captures this important truth.

The Prince of Dol Amroth. Imrahil is a late arrival on the scene and it's easy to see why Jackson cut him out from the films, but I did miss seeing him. Behind Aragorn he's arguably the best fighter on the field, and wherever he and his picked knights ride on the battlefield the enemy parts like water.

The Witch-King's confrontation with Gandalf at the gate. When the gates of Gondor are burst asunder in rides the Witch King, looking very much like one of the four horsemen of the apocalypse. All the defenders are stricken with fear and fly before him. All save one--Gandalf. I love the Witch-King's reaction to Gandalf, whom he treats with outright disdain:

"Old fool!" he said. "Old fool! This is my hour. Do you not know Death when you see it? Die now and curse in vain!" And with that he lifted high his sword and flames ran down the blade.

Grond. What's not to love about a 100-foot long ram, with its great head carved to resemble a slavering wolf's head? This is a great image by Tolkien:

The drums rolled louder. Fires leaped up. Great engines crawled across the field; and in the midst was a huge ram, great as a forest-tree a hundred feet in length, swinging on mighty chains. Long had it been forging in the dark smithies of Mordor, and its hideous head, founded of black steel, was shaped in the likeness of a ravening wolf; on it spells of ruin lay. Grond they named it, in memory of the Hammer of the Underworld of old. Great beasts drew it, orcs surrounded it, and behind walked mountain-trolls to wield it.

The Ride of the Rohirrim. After Theoden gives his rousing speech, he blows such a loud blast that he bursts the great horn asunder. Then he charges, not caring who is following him. Fey he seemed, or the battle-fury of his fathers ran like new fire in his veins, and he was borne up on Snowmane like a god of old, even as Orome the Great in the battle of the Valar when the world was young.

Who is Orome? Does it really matter? This is awesome stuff, as is the host of Rohan bursting into song, singing as they slew for the joy of battle. The charge is also my absolute favorite sequence from Jackson's film.

And Theoden does not stop after this initial charge. More foes begin to form up, including the men of the Haradrim, who rally around a standard of a black serpent upon scarlet. "The drawing of the scimitars of the Southrons was like a glitter of stars," writes Tolkien. But Theoden spurs his horse in again, heedless of his own safety:

Right through the press drove Theoden Thengel's son, and his spear was shivered as he threw down their chieftain. Out swept his sword, and he spurred to the standard, hewed staff and bearer; and the black serpent foundered.

What a great image; as I read this I can picture Theoden lancing the chieftain and impaling him/knocking him from his mount, tossing down his shattered lance shaft, then in one sword stroke hewing the thick wooden shaft of the standard and the poor fool holding it. Great stuff.

The Witch-King vs. Eowyn. Although I liked this sequence in the film I wish Jackson had retained more of the original dialogue, if for nothing else than for the fans like me who wanted to hear Miranda Otto say "dwimmerlaik:"

A cold voice answered: "Come not between the Nazgul and his prey! Or he will not slay thee in they turn. He will bear thee away to the houses of lamentation, beyond all darkness, where thy flesh shall be devoured, and they shrivelled mind be left naked to the Lidless Eye."

Tolkien's description of Eowyn ("Maiden of the Rohirrim, child of kings, slender but as a steel blade, fair yet terrible") is a joy to read, and Theoden's death is stirring. I felt a lump in my throat when Theoden tells Merry to think of him when he sits in peace with his pipe, "for never now shall I sit with you in Meduseld, as I promised, or listen to your herb-lore."

Eomer's fey mood/battle lust. Tolkien had a soft-spot for the pagans of old, the mighty Danish warrior-kings whose ultimate desire was to die not peacefully of old age while in bed, but on the battlefield clutching a sword. This is the Ragnarok spirit. Men in its grip cease to fear death even as it looms inevitable, for the joy of battle and of killing overtakes them. Their behavior is likened to that of a death-wish.

This exact spirit overtakes Eomer towards the end of the battle when all hope seems lost: His father and sister are both (apparently) slain, his men are scattered, the enemy is rallying, and to strike the final death-knell for the West, the black-sailed ships of the Corsairs of Umbar are coming down the river to bring yet more reinforcements to the enemy. Eomer's reaction when he sees the ships is not a wail of despair or a retreat behind the safety of the walls; instead he utters lines that could be taken straight out of Beowulf:

Out of doubt, out of dark to the day's rising
I came singing in the sun, sword unsheathing.
To hope's end I rode and to heart's breaking:
Now for wrath, now for ruin and a red nightfall!

These staves he spoke, yet he laughed as he said them. For once more lust of battle was on him; and he was still unscathed, and he was young, and he was king: the lord of a fell people. And lo! even as he laughed at despair he looked out again on the black ships, and he lifted up his sword to defy them.

Aragorn's arrival. Tolkien repeatedly pushes the characters and events of The Lord of the Rings to the brink of ruin, only to have some unexpected, last-second hope arrive to avert disaster. Aragorn coming up the Harlond on the black ships of Umbar with the Dunedain and the men of the south is a prime example, the "Return of the King" that changes the tide of battle. When Aragorn unfurls his standard of the White Tree and the seven stars and the high crown you can't help but cheer (well, at least I couldn't).

I think if you went back to an email I sent you after TFOTR came out I made a comment to the effect that I was dying to see the battle for Minas Tirith based on the CGI in the first movie given that it would be two years on and Minas Tirith was such a huger (huger? more huge? whatever) battle than all the others.

That said - that's not such a bad thing, that when you reread TROTK, it is still up to your imagination and not that of Peter Jackson's moviemaking abilities and budget.

I think everyone would love to see another hour of this movie that never happened, though. Give me 15 minutes of Aragorn sneaking into the city to heal his allies, the development of a relationship between Faramir and Eowyn, and the scouring of the shire and I'd trade that for some bucket of baloney Hobbit part 2 movie any day.

Hey Falze, I agree. I would be the first in line to see an hour and a half film about the Scouring of the Shire. This is going to be my next post, incidentally.

I enjoyed Jackson's version of the battle of Minas Tirith, but it had its flaws, notably the green ghost army (which undercut Theoden's sacrifice on the battlefield, and frankly, was the least convincing piece of CGI in the movie), and the over-the-top Mumakil moments.

I do give Jackson credit for recovering nicely with the "you bow to no one" scene, and although the scouring was sadly cut, Frodo's departure was very heartfelt and well-done.

This is one of my favorite movie that gives me goosebumps every time that I watch it. Terrific acting, emotional music and a legendary﻿ story make this one of the greatest movie in all movie history.