Some final thoughts on The Lord of the Rings 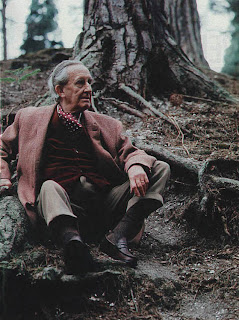 As I finish re-reading The Lord of the Rings, I'm reminded that, as an adult, I continue to enjoy this book as much as or even more than I did when I was a child. Rare is the book that you can pick up time and time again and find something new in its pages. But The Lord of the Rings seems to get better as I grow older, which speaks volumes for its breadth, depth, and multitude of meanings.

My first experience with Tolkien occured some 25 years ago when, as a fifth-grader, my teacher had us listen to the audio version of The Hobbit in class. I was hooked. Later I asked my mother to check out The Hobbit from its (misplaced) location in the adult section of the public library so I could read it again on my own.

It wasn't until I reached middle school that I graduated to The Lord of the Rings. I enjoyed it very much, although I remember skimming certain chapters and even skipping entire passages ("The Council of Elrond," "In the House of Tom Bombadil," the songs/poetry, the Appendices, etc.), since I was mostly interested in the adventure. So when I re-read The Lord of The Rings in high school it was like I was experiencing it for the first time. Although I missed many of its deeper themes during this second reading, I gained a greater appreciation for the world Tolkien had created, which seemed weightier and more real than the other fantasy I was reading at that time.

However, after high school I took a long (and not entirely voluntary) break from Tolkien. In college I became absorbed in my required English syllabus. Writers like Hemingway, T.S. Eliot, Yeats, Shakespeare, Tennyson, Euripedes, etc., filled my time, and my "casual" reading suffered. My battered paperback copies of Tolkien sat on the shelf, and waited.

It was in 1996 or so, a span of 7-8 years from my last reading, when I finally returned to Middle-Earth. I had decided to change my path of becoming a high school teacher, a difficult decision that I reached during long, solitary walks through a town forest with Tolkien as my companion. Around this time I started to understand and appreciate the deeper meanings of "The Road," of which mine had certainly taken some unexpected turns.

Later, while working the third-shift as a security guard, I recall walking the grounds of an under-construction condominium on the shores of Lake Champlain in Vermont with The Fellowship of the Ring tucked into my coat pocket, a chill wind blowing through the skeletal structure of the unfinished building. The courage and fortitude of the hobbits helped get me through that and another, equally awful job as an insurance salesman. Sam and Frodo's trek through Mordor made me realize that my lot in life wasn't so bad, and that, if I saw it through, something better would be waiting at the end.

During these and other rough times in my life, the escape and wisdom I found within The Lord of the Rings was a blessed salve. So too were its lessons. Here are a few:
Tolkien's intent in writing The Lord of the Rings was to construct a mythology for England, which suffered the dilution of its language and the loss of a great many of its foundational myths and stories during the Norman conquest of England. From my own perspective I can say that he succeeded. Middle-Earth has weight and authenticity, even if the characters and events in the tale are larger than life.

Robert E. Howard, creator of Conan, once remarked that his famous barbarian "stalked full grown out of oblivion and set me at work recording the saga of his adventures." Likewise, Middle-Earth feels like a real place, and The Lord of the Rings and The Silmarillion historic texts. Instead of a creator of a fictitous universe, Tolkien to me seems to be a chronicler of some dim and remote, and yet actual, "once upon a time."
For although my head assures me that The Lord of the Rings is of course just fiction, and that Middle-Earth is a place that never was and never can be, my heart whispers that maybe, just maybe, Tolkien saw a glimpse of the truth, beyond the great gray rain-curtain of this world. And in a sense, he did.
Posted by Brian Murphy at 8:16 AM

I read through all your commentary, and it is excellent. Lord of the Rings is a very special work, and sometimes it feels like it does not get the respect taht it deserves. There is a depth in the writing that nothing short of amazing. His ability to bring themes together and wrap it around a fantasy epic is a gift that few writers have. IMHO, the Lord of the Rings is one of the greatest books ever written, and it was a pleasure to read through your analysis.

Hi Brett, thanks for stopping by. It's always nice to encounter a kindred spirit when it comes to my favorite book.

I think that The Lord of the Rings is slowly but surely getting its just due. I think Tom Shippey has really helped this effort. If you haven't read Shippey's critical analysis of LOTR and Tolkien's works in general, I must recommend both The Road to Middle Earth and J.R.R. Tolkien: Author of the Century. These books make it impossible for the "literary establishment" to snub Tolkien anymore.

Thanks for the recommendations. I have added both to my Amazon wish list!