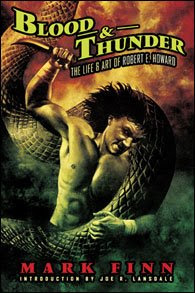 The echoes of Robert E. Howard's life can be found in the places where he best lived it--in his copious amount of fiction and verse. And while that is a good place to start forming a complete picture of Howard, eventually the Lone Star State will rear its ungainly head and bellow, "Well, what about me?" You can always take the man out of Texas, but it's impossible to take Texas out of the man.

It's hard for me to compare Mark Finn's Blood & Thunder: The Life & Art of Robert E. Howard, with any other biography of Howard, for the simple fact that it's the first full-length treatment of Howard's life that I've read. But over the years I've picked up a lot of detritus on the life of the man who brought us larger than life, pulp heroes like Conan of Cimmeria and Solomon Kane, gathering enough scattered bits of information to form what I thought was a pretty accurate picture of one of my favorite writers: Immensely talented, yet socially malajusted, overly dependent on his mother, with paranoid and schizophrenic tendencies.

Fortunately, Finn has set the record straight on Howard's character with Blood & Thunder, presenting an alternative view that brings Howard into focus as a colorful and misunderstood young man who took his own life largely due to circumstances beyond his control. Finn admittedly wrote his book as a counterpoint to the only other full-length biography of Howard, L. Sprague de Camp's Dark Valley Destiny, which according to Finn is responsible for many of the inaccurate myths surrounding Howard's life. "I tried to think of everything that I didn't like about de Camp's effort, and then I tried very hard not to do that," writes Finn. This is both admirable and, in a few places, limiting.

Blood & Thunder's strength to me is its claim that Howard was very much a product of his environment. The creator of Conan of Cimmeria and Kull the Conqueror was born and raised in early 20th century Texas, one of the last vestiges of American frontier life. Howard's father, a physician, moved Robert and his mother from small town to small town, following work that spilled over from the boom-and-bust cycles of oil speculation. These small towns were wild and violent places, Finn writes, and Howard the elder's services were needed to stitch men back together. Into this potent mix of brawling, wealth-chasing men, towns that knew untapped wealth and crushing poverty in a span of days, and the wide open plains of sand and scrub of rural Texas, Howard's career as a writer was born.

Finn's insights in these chapters are unique and insightful, as its easy to write off that Howard's "weird tales" were entirely products of his own imagination, and sprang, fully formed, from the recesses of his mind. Writes Finn, "To ignore the presence of the Lone Star State in Robert E. Howard's life and writing invites, at the very least, a few wrongheaded conclusions, and at worst, abject character assassination."

However, I don't agree with all of Finn's conclusions, including one of his boldest: that Howard had no choice but to commit suicide. Finn posits that Howard's death by self-inflicted gunshot "was the one, the only, thing he could do, given his circumstances." Finn paints a grim picture of those circumstances, which included constant brushes with poverty (due to the Great Depression and the whim of the pulp magazine editors, who often went months without cutting Howard a check), an overbearing and terminally ill mother, and a nomadic upbringing that left Howard unable to make lasting relationships. But to say that suicide was the only thing Howard could do in his situation absolves him completely from blame. There's always a choice to soldier on, no matter how grim our circumstances. Surely better times were ahead for Howard, and now we can only sadly speculate on the great works that would have flowed from his pen in his middle years. But, as Finn does state, the only one who truly knows why Howard pulled the trigger was Howard himself.

But Blood & Thunder is much more than an analysis of the how and why of Howard's death. There's some well-researched biographical material here, including a review of some of the odd jobs Howard worked, a look at his friendships and his brief relationship with Novalyne Price, his fascination with boxing and physical conditioning, and an overview of his correspondence with famous horror writer H.P. Lovecraft. One of my favorite chapters is "Mythology," the last, which provides a great overview of the post-Howard years, including his resurgence in the Lancer paperback series of the 1960's and 70's, the "Conan the Barbarian" boom sparked by the comic books and the movie of the same name, and the growth of critical studies dedicated to Howard's works (unlike Finn I happen to think that Conan the Barbarian was a terrific swords-and-sorcery film, if nothing at all like Howard's character).
I was particularly intrigued by "the trunk,"a huge collection of unpublished miscellaneous material that lay largely unopened from Howard's death until 1950, as well as the early days of Howard publishing by the likes of Gnome Press. Much of this material was new to me.

Finn also spends some time in this chapter refuting the claims about Howard's character circulated by the likes of de Camp and Hoffman Reynolds Hays, the latter a reviewer for the New York Times. De Camp's assessment of Howard is a doozy: "The neurotic Howard suffered from Oedipean devotion to his mother and, though a big and powerful man like his heroes, from delusions of persecution. He took to carrying a pistol against his 'enemies' and, when his aged mother died, drove out into the desert and blew his brains out." This is certainly unfair and, as Finn points out, in many places simply inaccurate. I do think Finn is quick to dismiss all of Dark Valley Destiny, even the interviews it contains from people who knew Howard. Finn says that de Camp's interview questions were leading in nature and evoked the negative responses about Howard for which de Camp had come looking, and already believed to be true. This may be true, but I'd like to read Dark Valley Destiny and formulate my own opinion.
In the end, however, this is another strength of Finn's book: It opens up the wider world of Howard's books and other material about his life that may not be so widely known. After reading Blood & Thunder I feel inspired to go back and read more of the Howard I've overlooked, such as his boxing stories and his historic fiction. The now-defunct Amra, a small-press fanzine dedicated to Howard's life and writings, sounds particularly intriguing.
Finally, Blood & Thunder contains a glowing foreward by Joe Lansdale, an underrated and very talented horror/suspense writer. Lansdale is a Texas native and is highly complementary both of Howard and Finn's book. Like Finn, Lansdale states that Howard is an author of worth and deserves wider recognition for his considerable talents as a writer of visceral action, adventure, and atmosphere; I happen to agree strongly with both men.
In summary, Blood & Thunder is highly recommended for any Howard fan.
Posted by Brian Murphy at 8:22 PM

The truth might likely be somewhere between Blood & Thunder and Dark Valley Destiny, but I'd bet dollars to dimes that DeCamp's take is closer to the truth.

Howard's legacy as the greatest Pulp Sword & Sorcery writer ever remains untarnished no matter the truth. I'm not sure it's necessary to defend his good name. A work like this serves more to remind or acknowledge that indeed Howard led a haunted life.

Thanks for the review, Brian. It is certainly an interesting topic.

I'm no Howard scholar, so I can't say this for reasons I could defend -- other than to say it's what my gut tells me -- but DeCamp, whatever his other very real virtues, was never above feathering his own nest, reputation-wise, by bringing down the reputations of his predecessors. Considering what a hatchet job DeCamp did on Lovecraft, I have little doubt that he did much the same to Howard. This isn't to suggest that REH was what we'd call "well adjusted," but neither was he the paranoid Mama's boy that DeCamp would have us believe.

Excellent review. I've got a copy of this book, and I really need to get around to reading it.

Also, have you ever read The Dark Barbarian? It came out a few years ago and contains a bunch of critical essays on Howard and his works. I read portions of it a number of years ago - I should re-read it as well as read this one.

Badelaire: I own The Dark Barbarian and have read a few essays here and there, but I need to get around to reading it cover-to-cover. It is regarded as the seminal work in Howard studies.

As I said in my post I highly recommend Blood & Thunder. It's an easy, quick read and it contained a lot of information new to me.

James/Sham: De Camp's reputation has fallen considerably in recent years, as it seems he did a lot of sensationalizing in his biographies of both Howard and Lovecraft. I still want to read Dark Valley Destiny and decide for myself, however.

I've been reading a bit of late in regard to de Camp. I think this post over at The Cimmerian sheds quite a bit of light on the topic of the REH/HPL de Camp bio's.

Regardless, I still have great respect for de Camp, based on books like Lest Darkness Fall, The Wheels of If, and the Harold Shea series. Clearly I was a bit out of the loop on my initial take, and Mark Finn certainly deserves more credit than I initially assumed. de Camp should have a much greater reputation for what he did for pulp fans through the years, as a champion of REH and HPL's works, if not for his cold, short-sighted, psycho-analytical takes on the lives of the two writers.

Thanks for inspiring me to look deeper into the subject. I'm happy that Leo Grin, and others, appreciate the trails blazed by de Camp. Too bad his legacy has been tarnished because of his 'excess sensationalism'. Clearly all three had their shortcomings, and it's sad that de Camp will be remembered as the guy that tried to 'cash in' on the legacies of two of his deceased pen-pals.