A Princess of Mars, a review 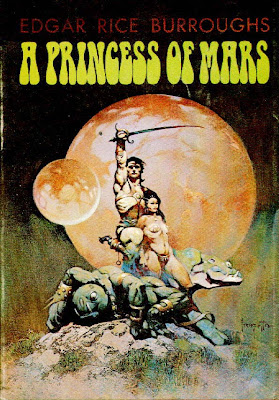 In 1917 World War I was in the midst of its savage throes, and suspended over its torn battlefields like a bloody pendant hung Mars. Fertile ground enough for Edgar Rice Burroughs to pen A Princess of Mars, his first novel of earthman John Carter’s violent adventures on the red planet.

Thanks to the wonders of Librivox.org I was recently able to enjoy A Princess of Mars while driving to work (Librivox is to audio books what Project Gutenberg is to the printed word, providing public domain works, read by volunteer narrators, freely to the general public).

A Princess of Mars begins on earth in the decade following the Civil War. Carter, an ageless/seemingly immortal (for reasons puzzlingly left unexplained in A Princess of Mars) veteran of the Confederate army, is prospecting for gold in Arizona. A group of Apaches kill his friend and pursue Carter to a cave high in the mountains. Exhausted, Carter lies down and is mysteriously transported via astral projection to Mars.

Named after the ancient Roman god of war, Mars (called Barsoom by its native inhabitants) lives up to its violent appellation. It’s populated by monstrous beasts and alien races in a state of continual conflict. These include the green skinned, four armed Tharks, whose male members tower some dozen feet in height, and the more civilized Martians, human-like in appearance save for their red skin. Resources are scarce on Mars. Its waterless canals are cracked and dry and its air is kept breathable only through a massive atmosphere generator.

Carter’s first run-in on the planet is with the Tharks. Though he’s a stranger in a strange land and only half their size, Carter has several advantages that make him a formidable warrior. With a body used to earths’ stronger gravitational pull, Carter is able to make 50 foot leaps in the thin Mars atmosphere and is also equal in strength to the mightiest of the Tharks. Everyone on Mars has telepathy and can read one another’s thoughts, as can Carter, but he is immune to mind-probing and so is at a distinct advantage, able to anticipate their attacks in the duels to which he is frequently challenged.

Mars is a cruel planet and the Tharks exhibit no mercy. They are a race born into conflict, whose imperfect young are ruthlessly weeded out and murdered to create a physically strong, loveless race (“Tears are a strange sight upon Barsoom,” says a female Thark named Sola). But with his physical skills and easily assimiliation of the Tharks’ language and customs, Carter quickly rises in their ranks and reaches the status of minor chieftain. But he eventually finds himself at odds with the green men after the latter capture the beautiful red skinned Dejah Thoris, daughter of Mors Kajak, jed of Lesser Helium and granddaughter of Tardos Mors, jeddak of the capital Martian city of Helium (one of Burroughs’ strengths as a writer is his creation of evocative, otherwordly names).

Carter is not what I would consider a fleshed-out, three dimensional character, but Burroughs provides a few tantalizing details in A Princess of Mars that elevate him into something more than a mindless action hero. In addition to his agelessness, Carter is a lonely soul who despite his long years on earth has never experienced true love. When he falls for Dejah, the sensation strikes him like a thunderbolt. He realizes that he does not want to return to earth, for on Mars he knows the fullness of love. His life now has a purpose.

The remainder of the book revolves around Carter’s attempt to rescue Dejah from the clutches of the Tharks. If you like non-stop action in your reading then A Princess of Mars is for you—it’s literally one epic battle or chase scene after another. It’s also a moving love story as Carter pursues Dejah Thoris to the ends of Mars, risking life and limb to win her affections.

What I find most interesting about the book are its contrasts with another pulp fiction writer and contemporary of Burroughs, one Robert E. Howard. In many ways Burroughs’ world-view was diametrically opposed to Howard’s own: Throughout A Princess of Mars civilization triumphs over barbarism, such as when Carter trains his thoat (an eight-legged creature that serves as a mount for the Tharks) using love and patience instead of brutality. Carter’s methods prove so superior to the Tharks’ brutal techniques that they have no choice but to emulate his methods. Also, the Martian races are portrayed as corrupted, fallen from their formerly peaceful ways. Mars had once been home to a highly cultivated and literary race, but wars with the green men and the changing climate resulted in the loss of all their archives, records, and literature (note that Howard did not acknowledge barbarism as superior to civilization in all respects, simply an inevitable state of mankind).

That said, Burroughs in my opinion is a notch below Howard as a writer. While he’s a great storyteller, Burroughs lacks Howard’s poetry and brilliant peaks of action, and his dialogue resembles stiff speeches rather than actual conversation. I was also left with unanswered questions about Burroughs’ pseudo-science and its ramifications (note that I’m not someone who picks at these kind of things, but a few of Burroughs’ oversights seemed rather egregious). For example, the telepathy issue was not well thought-out. It’s hard to grasp the ramifications of knowing everyone’s true thoughts and Burroughs doesn’t bother to try to explain it, only bringing up the issue when he needs to advance the plot. Carter should have been able to use this ability to his advantage at every turn (and why for that matter was Carter shocked when Dejah admitted she loved him—shouldn’t he have already known?)

Those criticisms aside, Burroughs is a wonderful storyteller and it’s impossible not to get caught up in the savage beauty of Mars. Burroughs even slips in some good lawyer humor (“In one respect at least the Martians are a happy people; they have no lawyers”) and a good deal of titillation: Everyone in the book is nude. I’m not sure how the forthcoming film plans to handle this; My guess is with some well-placed silks and loincloths.

A Princess of Mars was followed by ten more novels set on the red planet, most starring Carter. So if you enjoyed the book you're assured of many more Barsoomian adventures to come.

Because it’s in the public domain A Princess of Mars is quite easy to obtain. You can download the Librivox audio files (three Barsoomian cheers!) here: http://librivox.org/a-princess-of-mars-by-edgar-rice-burroughs-2/. Or you can read the entire text of the story here: http://www.erbzine.com/craft/m1pm.html
Posted by Brian Murphy at 10:53 PM

Sweet - I was just planning on reading this series, but couldn't find the first two volumes. (I found the rest at the Book Barn in Niantic, CT (They have more!))

Now I can listen to the audio while at the gym.

Great review! I've only read Princess of Mars, I need to get around to reading the others. I can't wait to see the movie that's being shot right now.

Thanks for the heads up on Librivox.com!

Every SF fan and RPGer should read Princess of MARS for the reason it's a seminal source for D&D and therefore the whole of the modern adventure games industry/hobby.
Then they should read it again because it's a fabulous work of imagination. Then they should read Gullivar of Mars to see what Burroughs may have been inspired by.

Nice review. I'd agree with her comments about Howard being a somewhat better writer in most respects (and that's as a pretty big Burroughs fan and former member of the ERB-APA). If there's one thing he does that perhaps Howard doesn't it's the humorous social commentary (like the Lawyer's bit) or his lampooning of religion in later works and the scientific establishment in the first venus book.

Eric/Atom Kid: You're welcome about the Librivox.org information--I myself was tipped off by SFFaudio.com, a site which I strongly recommend for news of this sort.

Trey: Thanks! I am unaware of the existence of the ERB-APA. Is that strictly a mailing/print outfit, or are any of its works available online?