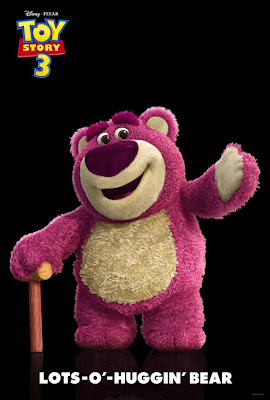 Warning: This essay contains some spoilers.

If fairy-story as a kind is worth reading at all it is worthy to be written for and read by adults.
--J.R.R. Tolkien, Tree and Leaf

I don’t get to the theatre too often these days, and with two young daughters in tow more often than not it’s to see a children’s film. But I’m not lamenting this fact, especially when the movies are of the quality of Toy Story 3.

Hey, I love Robert E. Howard, Bernard Cornwell, and the Viking novels of Poul Anderson as much as the next battle-mad fantasy fan, but I’m man enough to admit liking (most) Pixar films as well. And Toy Story 3 might be the best one I’ve seen. Critical consensus is not necessarily a hallmark of a good film (see Blade Runner, panned on its initial release by most critics, recognized as genius years later), but I think it’s telling that Toy Story 3 currently has a 99% “fresh” rating on Rotten Tomatoes. In this case, the critics are spot-on.

Toy Story 3 is a near-perfect children’s film. Like all children’s films, it possesses straightforward story lines, engaging visuals, and brisk action in order to keep young attention spans focused. (If these qualities sound like less than appealing, well, genre films can’t be all things to all people). So why sing its praises on Black Gate? Toy Story 3 serves as an instructive example of how to tell a great story within the confines of a given genre. Just like you can’t get too bogged down in dialogue or non-linear narrative techniques in a movie for kids, that story you submit to Heroic Fantasy Quarterly better contain some elements of sword play and sweeping action if you want to stand a chance of getting it published. If you disregard your audience you’re destined to fail.

To read the rest of this post, visit the Black Gate website.
Posted by Brian Murphy at 10:00 PM

Great advice, Brian. I'll try to heed it as I finish up my novel.

Great piece Brian, now I want to go find/read Sadness of the Executioner.

Excellent review! You know I agree on the idea of great fantasy "for all ages" should be equally readable for adults as well as children.

However, I'm actually in some (small) disagreement in some points: first, regarding your belief that a "lesser film" would have Lotso gain redemption. On the contrary, I found Lotso's betrayal to be entirely predictable and par for the course with most Disney villains. Just about every (main) Disney villain is beyond redemption or forgiveness, so this was really a case of Lotso falling into the limits for me.

Secondly, the idea of Toy Story dealing with themes not normally associated with children's films - dude, there are many kid's films that deal with bigger themes like that, that mix harrowing peril, devastating sadness and pure terror in with the laughter and whimsy. Disney is founded on such ideals. Heck, a lot of Toy Story 3 is a "homage" to "The Brave Little Toaster" movie (not surprising since the studio who made that film went on to found Pixar). Toy Story 3 does a great job of it, but it's far from alone.

Still, I agree with just about everything else. Sword-and-Sorcery writers could learn a lot from Toy Story 3. As an aside, I found Lotso's ultimate fate to be even more horrific than death.

Thanks for the comments, all.

Eric: Keep me posted on the progress of the novel.

David: "Sadness of the Executioner" is a Fafhrd and the Gray Mouser tale written from the point of view of the Newhon god, Death. It's not Leiber's best, but it's a good example of how swords-and-sorcery doesn't have to be written over the shoulder of the lone, strong hero.

Taranich: I haven't seen a lot of Disney films, or the Brave Little Toaster, but the ones that spring to mind feature villains that are evil for evil's sake. I'm thinking specifically of Ursula from The Little Mermaid and Gaston from Beauty and the Beast, two of the Disney films with which I'm more familiar. Both are presented as unredeemably evil (in Gaston's case, more of a stupid/vainglorious version of evil) and we're expected to dislike them from the get-go.

The difference with Lots-o' in my opinion is that his dark half is explained, and a reason is provided for his wickedness. Woody hears his story from the clown and sympathizes with him. I at least expected Lots-o' to accept Woody's helping hand, and to realize that his abandonment was a cruel twist of fate, not a reason for ultimate despair. My older daughter was surprised he didn't accept, either.

Yeah, strapped forever to the front of a garbage truck... yikes. I actually recoiled a bit from that.

I agree that Lotso's motivations and the reason for his evil are more reasonably explained than the Disney villains, but I still felt that Lotso wasn't going to have a change of heart no matter how much Woody & company tried. I dunno, maybe I watched too many of these as a lad.

Presenting their villains as friendly and likeable, or at the very least neutral, before exposing their dark nature is a classic Pixar element. Toy Story 2, Monsters Inc, The Incredibles, Wall-E, Up and now Toy Story 3 have them. Hmm. Still, they mix it up every so often.

I look away for a few moments, and suddenly you're being published in Black Gate. Congrats, and excellent article as always. :D

Are you doing fiction as well these days?

Thanks Trollsmyth! Yep, after the demise of The Cimmerian, the folks over at Black Gate were nice enough to extend an invitation to keep writing fantasy related articles on their fine site.

I am writing some fiction, but nothing worthy of print, I'm afraid.