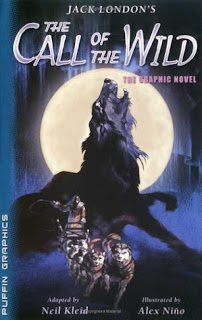 "I have carefully gone over, in my mind, the most powerful men – that is, in my opinion – in all of the world’s literature and here is my list: Jack London, Leonid Andreyev, Omar Khayyam, Eugene O’Neill, William Shakespeare. All these men, and especially London and Khayyam, to my mind stand out so far above the rest of the world that comparison is futile, a waste of time. Reading these men and appreciating them makes a man feel life is not altogether useless.”

It’s no secret that Robert E. Howard was a devotee of Jack London. In fact, Howard once referred to London, a spinner of rugged tales of the Klondike and the Yukon, as “this Texan’s favorite writer” (for more examples of the glowing praise Howard heaped on London, head on over as I did to the REHupa Web site).

And yet, I hadn’t fully appreciated the extent of London’s influence on the greatest swords-and-sorcery writer who ever lived until this week, when on my commute to work I listened to the audio version of my favorite London story, The Call of the Wild (1903). It was a startling reminder that Howard’s sensibilities are splashed across every page of this wonderful book.

If you are a Howard fan frustrated by fruitless searches for like-minded literature, I recommend you turn your gaze backwards, to Howard’s influences, and London in particular. Don’t be turned off by the lack of traditional fantasy trappings in London; while you (unfortunately) won’t find swords, man-eating apes, and giant snakes in The Call of the Wild, there’s plenty here to satisfy lovers of pulp action and adventure, including epic dog duels, murdering Indians, and high-stakes wagers placed on improbable feats of strength. More to the point, there’s more of Howard—the dark philosophy that makes Howard uniquely and greatly Howard—to be found in The Call of the Wild than in most other sword-and-sorcery tales published since Howard’s death. London’s work certainly puts most of the pastiches to shame in this regard.

To read the rest of this post, visit The Cimmerian Web site.
Posted by Brian Murphy at 10:06 PM