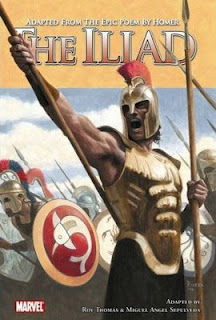 Many fantasy fans avoid Homer’s ancient heroic epic The Iliad, perhaps fearing that it will prove too academic and stuffy, one of the dreaded “classics” so revered in academia (and avoided outside the classroom). This is a mistake. If you’re a lover of bronze-age battles and the clash of spear and shield, The Iliad is a must-read. Who would have thought a near 3,000-year-old poem would contain some of the greatest depictions of hand-to-hand combat ever put to the printed page?

I was shocked by its scenes of carnage, which, without exaggeration, equal or surpass the gory combats of George R.R. Martin and Bernard Cornwell. For example, when the great Achaean warrior Ajax spears Archelochus, Homer describes the blow thusly: “Just at the juncture of his neck and skull the blow fell on his topmost vertebrae, and cut both tendons through. Head, mouth, and nostrils hit the earth before his shins and knees.”

Peneleus instead brought down Ilioneus, a son of Phorbas, the sheepherder … Peneleus drove his spearhead into the eyesocket underneath the brow, thrusting the eyeball out. The spearhead ran straight through the socket and the skull behind, and throwing out both hands he sat down backward. Peneleus, drawing his longsword, chopped through the nape and set the severed helmeted head and trunk apart upon the field. The spear remained in the eyesocket. Lifting up the head by it, as one would lift a poppy, he cried out to the Trojans, gloating grimly. 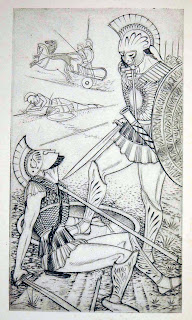 Homer is not shallow in his treatment of combat and does not treat the battlefield as a glorious stage for heroes. He refers to the bloody action as “man-wasting war,” a costly harvest that leaves in its wake grieving mothers and fathers, and wives and children bereft of husbands and fathers. Tragically, Homer reminds us that many loved men with beautiful homes and far-ranging vineyards back in Greece will never return home on their long ships. Like the heroes of Normandy, their lot is to be buried in graves in far lands.

The events of The Iliad comprise 50 days in the 10-year war between the Achaeans and the Trojans. Homer’s epic poem is highlighted by various heroes who experience an aristeia, a sustained period of excellence in combat. Achilles’ wrathful aristeia is the most well-known in The Iliad, but for epic action I prefer Diomedes’.

Diomedes is arguably (along with the giant Ajax) the second-greatest of all the fighters on the field behind Achilles. Supported by the goddess Athena, in Book V of The Iliad he goes on a glorious rampage that nearly routs the Trojan army single-handed:

But as for Diomedes, you could not tell if he were with Achaeans or Trojans, for he coursed along the plain most like an April torrent, fed by snow, a river in flood that sweeps away his bank. No piled up dike will hold him, no revetment shielding the bloom of orchard land, this river suddenly at crest when heaven pours down the rain of Zeus. Many a yeoman’s field of beautiful grain is ravaged. Even so before Diomedes were the crowed ranks of Trojans broken, many as they were, and none could hold him.

Diomedes suffers an arrow-wound in the right shoulder, though his armored cuirass prevents a fatal or crippling wound. After his chariot-driver pulls the shaft free, spattering Diomedes’ bronze armor with blood, he returns to battle in a fury. Homer uses metaphors like no one’s business in The Iliad, and Diomedes-as-lion is one of my favorites:

And once more he made his way into the line. If he had burned before to fight with Trojans, now indeed blood-lust three times as furious took hold of him. Think of a lion that some shepherd wounds, but lightly as he leaps into a fold. The man who roused his might cannot repel him, but dives into his shelter, while his flocks, abandoned, are all driven wild. In heaps, huddled they are to lie, torn carcasses, before the escaping lion at one bound surmounts the palisade. So, lion-like, Diomedes plunged on Trojans.

Diomedes quickly slays eight Trojans, including two sons of King Priam (Echemmon and Chromius). Observing the slaughter, the mighty Trojan warrior Aeneas, son of the goddess Aphrodite, and fellow Trojan Pandarus spur their chariot at Diomedes. Pandarus hurls his long spear, punching through Diomedes’ shield and glancing off his chest armor. Diomedes responds with a mighty cast to “cleave Pandarus’ nose beside the eye and shatter his white teeth. His tongue the brazen spearhead severed, tip from root, then plowing on came out beneath his chin. He toppled from the car, and all his armor clanged on him, shimmering.”

Aeneas attacks Diomedes on foot, moving in with spear and shield. Weaponless, Diomedes lifts up a boulder that “no two men alive could lift,” hurls it, and smashes Aeneas’ hip joint. Aeneas would have died there if not for the intervention of Aphrodite, his mother, who whisks him away from harm. Diomedes wounds the goddess’ hand with a lance thrust as she flees back to the heavens. Diomedes later becomes the only mortal to wound two gods in a single day, spearing the god of war himself, Ares, and driving him from the field.

I can’t leave The Iliad without quoting one of my favorite combat descriptions. Roused by the death of his good friend and companion Patroclus, Achilles finally joins the battle and wreaks awful vengeance on the Trojans. Homer compares his wrath on the battlefield to an unchecked wildfire:

A forest fire will rage through deep glens of a mountain, crackling dry from summer heat, and coppices blaze up in every quarter as wind whips the flame. So Achilles flashed to right and left like a wild god, trampling the men he killed. And black earth ran with blood.

I hate to admit it, but I've never read the Iliad. I've read passages, but never the whole thing, and one of these days I need to remedy this - I've had a copy sitting around for the better part of...13 years now?

I was lucky enough to read the Iliad in high school with a great English teacher. More and more, the gods of the Iliad have come to be the model of the gods in my campaigns: exceptionally powerful but not untouchable. Rather than all-power or amorphous platonic ideals, the gods of the Iliad are flesh-and-blood with fears and foibles and jealousies and ignorance. They may be immortal, but that doesn't mean they can't be hurt, can't be driven from the field by a skillful warrior or an unlucky moment. As I recall, Troy receives a lot of direct aid from the gods, but of course it does them little good in the end.

Badelaire: Obviously, I recommend giving it a try. There's a section early in the book which is rather daunting to get through--Homer lists out half the Achaean army by name, and how many arrived on which ships and from where, etc. I can imagine running into this brick wall and wanting to put the book down. But once you're past it, it's a surprisingly easy and very engaging read. I actually listened to the audiobook, read by George Guidall, who is the best reader in the business, so that made it easier as well.

Trollsmyth: That's how I'd use gods in my D&D campaign as well (were I running a game and not playing in one, that is). I haven't got Dieties and Demigods in front of me, but weren't the statted-up gods intended to be avatars of the gods as they would appear on the prime material plane? Thus allowing sufficiently powerful PC's to "fight" them?

I don't remember what, if any, sort of justification was given for it, but I do remember out attitude back in the day was: if it has hit points it can be killed! ;)

I had a ranger who (in a fit of very Asgaardian pique) slew Loki when the trickster god tried to rob him. Of course, this was back in those wacky days where you didn't just build a fortress, but stole some illithids' dimension-hopping, steam-powered starship to use as your fortress when you got to 10th level.

Yo! Get cracking on some more of these!

Hey Badelaire, I've been slacking on these... another is up now.