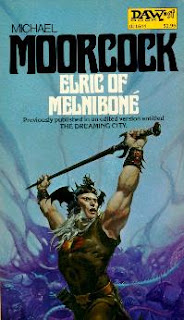 It’s a testament to the imaginative might of author Michael Moorcock that his most famous creation, Elric of Melnibone, has become a permanent and prominent thread in the fabric of fantasy history. Though he may not be quite the same household name as Conan, what fantasy fan hasn’t heard of the albino warrior/sorcerer, he of the tortured soul and wielder of the black demon sword Stormbringer?

The character of Elric first appeared in print in 1961 in a short story entitled “The Dreaming City.” Author Michael Moorcock later expanded the work into a short novel, Elric of Melnibone (1973). Though not perfect, I consider this latter a must-read for fans of fantasy fiction. It’s a marvelous work of imagination whose beautiful trappings include Imrryr, a city of alien architecture and strange, often abhorrent customs; demon-summoning sorcerers; and appearances by elementals and the gods of chaos. It combines the fast-pace and adventurous swagger of pulp fiction with a main character prone to brooding meditation and self-doubt.

The Elric stories are deliberately iconoclastic, taking an ironic stance in opposition to traditional/Tolkienian high fantasy and their often conservative worldviews. Elric is the reluctant emperor of Melnibone, a decadent, fading, yet still powerful kingdom that has dominated the Young Kingdoms of the earth for 10,000 years (think of Rome had it never lost its military might and was ruled by emperors like Caligula for millennia). Drunk on the blood of conquest, immoral to the core, and frequently under the influence of dream-inducing drugs, the Melniboneans live by the philosophy, “seek pleasure, however you would.” Slaves perform all the menial work, and some have been surgically altered/bred to perform single functions like singing a single, perfect note, or rowing a war-galley.

The army is unwaveringly loyal to the lineage of the Ruby Throne, as are its emperors—until Elric inherits the throne. He begins to question the old traditions, including the Melnibonean’s right to rule the Young Kingdoms with an iron fist. At heart Elric wants to abdicate the throne and run away with his love, Cymoril. But he’s afraid that the next in line to the throne—his cousin, the wicked Yrkoon, a throwback to the cruelest lords of Melnibone—will institute a reign of terror in his stead.

Yrkoon and his followers despise Elric, whom they perceive as weak and a threat to Melnibone’s place of power. They devise a plot to kill him during a barbarian invasion from the sea. Elric leads a successful attack that routs the barbarians, but at his lowest ebb (Elric’s weak constitution requires him to take a potent concoction of daily drugs to maintain his energy), Yrkoon shoves him into the sea. Weak and weighed down by his armor he begins to drown.

Thinking Elric slain, Yrkoon sails home and assumes the throne. Elric, however, is saved by a whispered spell to an elemental god of the sea and returns to Melnibone to punish and exile his cousin. Aided by a handful of followers, Yrkoon takes Cymoril hostage and escapes the Dragon Isle to start an uprising in one of the barbarian kingdoms. The remainder of the book includes Elric’s quest to get Cymoril back, which culminates with Elric’s recovery of the powerful but cursed Stormbringer.

Elric of Menibone starts off exceedingly strong with some memorable description and characters. Moorcock succeeds in making Melnibone feel like an alien place, as torture, incest, and dining on human flesh are routine occurrences (a scene with the sinister court torturer/chief interrogator Dr. Jest—a thin, sinuous man wielding a merciless, razor-thin scalpel—is forever seared into my memory). Moorcock’s portrayal of magic is exactly the way I like it—powerful and capricious, accessed through great grimoires capable of summoning great powers of darkness, but also prone to turn on the caster in unpredictable ways.

For all its strengths, however, Elric of Melnibone—and in particular its sequels—are not perfect. Moorcock is blessed with a tremendous imagination, but at times I find that he fails to deliver on his promise. For example, we’re told that the Melnibonean sorcerer-kings engage in drugged dream-sleep that allows them to wander other worlds and universes, “consort with angels, demons, and violent, desperate men,” and learn the accumulated lore and magic of the Melnibonean race, all from their dream couches. As a result of these dream-quests, their minds are millennia old. It’s a great concept. And yet how does this activity result in a character like the impetuous Yrkoon, who acts like a spoiled 25-year-old prince instead of a thoughtful sage suffused with the wisdom of ages? I also found the Elric series slips into repetition in later books as Elric battles one demon after another. His world-weary attitude in itself grows tiring after several books as well.

Finally, I must state that I found this Audio Realms AudioBooksPlus presentation a mixed bag. The reader, Jeffery West, was talented and altered his voice enough to create recognizable characters. This version also featured a brief overview/introduction read by Moorcock himself, a very nice, unexpected bonus. But the production was marred by the head-scratching decision to play music in the background throughout the entire reading. This included a loud heartbeat sound played during dramatic scenes. After a while I ceased hearing the music, but at times it was jarring and took me out of the flow of the story.

Note to Audio Realms and other audio book producers: The thought is appreciated, but please drop the soundtracks and stick to the text. 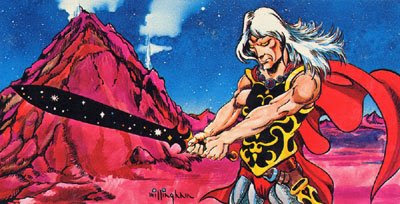 I've never agreed with Moorcock's criticisms of Tolkien, and the anti-Tolkien feel of his books. But I love this series! This is one series that is hard to put down! Elric's brooding does get tiring, but the action is intense and bad guys in the book are as evil as evil can be!
I always thought that R.A. Salvatore's Drizzt was just a pale imitation of Elric!

The Elric series always defined high fantasy for me. Succinct, over the top, and unique. Not great pieces of literature, but a whole lot of fun.

I don't like the Elric stories. They have such a strong air of trying desparately to be "not Tolkien" and iconoclastic that they put me off even more than Moorcock's mediocre writing.

In my experience, anything that tries to be iconoclastic just comes across as annoying, and the Elric stories are no exception at all.

Thanks for the comments everyone. I do enjoy Elric of Melnibone, the first in the Elric series, but after that the series starts to decline (in my opinion). I have found Moorcock's opinions on Tolkien rather off-putting as well, as well as simply inaccurate in places. But I still find the Elric stories worth reading for fun, and they are remarkable works of imagination.

I loved the books. Read them as a fifteen year old. There is no destiny but the path we choose. Bad things may happen but I will fight like hell to make sure they don't happen to me. I will stand with my dancing demon possessed black blade and laugh at those who would oppose me. You know...we are all just sailors on the seas of fate. Be strong...a lot more change is coming. I do love that stuff...always will.