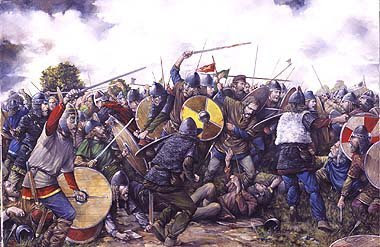 He stared balefully across the encampment where men were drinking. “Do you know who wins battles, boy?”
“We do, Father.”
“The side that is least drunk,” he said, and then, after a pause, “but it helps to be drunk.”
“Why?”
“Because a shield wall is an awful place.”

As a self-professed lover of medieval-flavored fantasy and historical fiction battles, and as someone who relishes in bloodshed on the printed page, I nevertheless must come clean: Some periods of ennui aside, I’m quite glad that I live in modern, civilized times. I especially thank the powers that be that I don’t have to strap on arms and armor and fight in the blood-soaked hell that was a viking shield wall.

Bernard Cornwell shattered any fantasies I may have had of engaging in dark ages combat in his wonderful, ongoing series The Saxon Stories. These books have something of a shield wall fetish, and are a repository for the sweet science of making one (keep that in mind should the need ever arise). For example, there’s this good-to-know factoid:

You can hear a shield wall being made. The best shields are made of lime, or else of willow, and the wood knocks together as men overlap the shields. Left side of the shield in front of your neighbor’s right side, that way the enemy, most of whom are right-handed, must try to thrust through two layers of wood.

Cornwell describes how many battles were delayed for hours as men on both sides gulped ale to build up their courage. Shield walls were simply too brutal and murderous to stand in completely sober. Picture a rugby scrum in which the participants not only push but stab one another with spears and short blades over the rims of their shields, or underneath, at exposed legs and ankles. Many fighters would strap iron plates to their boots to turn such wicked strokes, Cornwell says.

But more about shield walls later. The background of the battle of Cynuit is as follows: Uhtred of Bebbanburg, a Saxon who was captured in a raid as a youth and raised among the Danes, Ealdorman Odda, and approximately 900 Saxons square off against the raven banner of Ubba Lothbrokson and his 1,200 Danes. Odda and Uhtred have the advantage of high ground and some degree of protection from the old, eroded, earthen fort of Cynuit. But they have only a day’s worth of water and cannot withstand a siege, so they must act.

Uhtred develops a plan to sneak out at night with a small force of 100 men and burn the Danish ships, which are moored in a nearby river. Since the Danes are so protective of their longships, Uhtred predicts that they will lose their discipline when they rush back to quench the fires. Uhtred’s small force will fight them there, on the narrow strip of marsh-lined beach where Ubba cannot bring all his strength to bear. Then, in the heat of the combat when shield walls are locked, Odda will fall upon Ubba from the rear with the rest of the men from the fort.

But this plan is easier said than done. Though he’s beginning to gray Ubba is a mighty fighter, perhaps the mightiest in hand-to-hand combat of all the Danes. He wields a wicked heavy axe in combat and no man who has stood before him in battle has lived. His men are better armed than Uhtred's. But Ubba’s one weakness is his superstitious nature. He does nothing without a sign from the gods, and in this battle the runesticks have fallen against him. Thus, when Uhtred and Odda refuse his offer to surrender, Ubba feels fear.

Uhtred’s plan works. Sneaking through the pre-dawn hours on foot he manages to set fire to a few Danish ships at daybreak, rousing Ubba’s small army like a swarm of angry bees. The few Danes near the ships are confused and easily cut down. Uhtred and his 100 men form a shield wall that stretches across the narrow beach and close with the main of the Danish army. Uhtred recalls his father’s words as the shields touch close.

Shield wall. It is an awful place, my father had said, and he had fought in seven shield walls and was killed in the last one.

The angry Danes make the mistake of charging like mad dogs and not forming a proper shield wall of their own. Uhtred’s men slaughter the first wave. “It was ax work and sword work, butchers’ work with good iron.” A battle calm comes over Uhtred and he finds killing frightfully easy with his short sword Wasp-Sting:

I lunged Wasp-Sting forward, and the Dane ran onto her point. I felt the impact run up my arm as her tip punctured his belly muscles, and I was already twisting her, ripping her up and free, sawing through leather, skin, muscle, and guts, and his blood was warm on my cold hand, and he screamed, ale breath in my face, and I punched him down with the shield’s heavy boss, stamped on his groin, killed him with Wasp-Sting’s tip in his throat.

The clash of shield walls rings like a thunderclap. Uhtred experiences “the thunder of shield hitting shield, my shield knocked back against my chest, shouts of rage, a spear between my ankles, Wasp-Sting lunging forward and blocked by a shield, a scream to my left, an ax flailing overhead.” The battle degenerates into a grunting mass of men hacking and stabbing and dying and bleeding. Uhtred’s shield wall is driven back on the burning ships.

But then Odda arrives and takes the Danes from behind. The pressure is immediately relieved. Uhtred draws his battle-sword Serpent-Breath and attacks, discovering that he is in elite, deadly company:

Danes begin to fall back, and some retreat to their ships, shoving them off into the sea. But Ubba bravely stands, ordering a last shield-wall in a rearguard action. A berserk rage overtakes him:

And then, with a roar of fury, Ubba hacked into our line with his great war axe … his huge blade was whirling again, making space, and our line went back and the Danes followed Ubba who seemed determined to win this battle on his own and make a name that would never be forgotten among the annals of the Northmen. The battle madness was upon him, the runesticks were forgotten, and Ubba Lothbrokson was making his legend.

In a mighty single duel Uhtred slays Ubba when the latter’s foot slips in the spilled guts of a corpse. Uhtred stabs him with Serpent-Breath in the arm, then hacks his neck. Uhtred shows his foe the ultimate respect due a viking, holding Ubba’s hand tight to his axe as he dies, since only a man who dies on the battlefield clutching a weapon makes it to Odin’s hall.

“Wait for me in Valhalla, lord,” Uhtred says to the dying man. And with Ubba’s death, the Danes are finished.
Posted by Brian Murphy at 1:32 PM

Just wanted to say I'm really enjoying this list you've started. I've been enjoying Cornwell's Saxon Stories since they started coming out, and it was a pleasure to see this vivid battle on your list. If you haven't read his Warlord Series yet (The Winter King, The Enemy of God, Excalibur) I heartily recommend them. They were my first introduction to the Shield Wall.

Brian, good to see Uhtred, son of Uhtred, in this list. I've never read a Bernard Cornwell book I didn't like, and while I think his writing is excellent overall, I find the Saxon Tales to border on the prosaic.

And it really is interesting to see the dynamics of personal heroism, honor, and respect (or lack thereof) played out in the battles. Two men might do everything conceivable to kill one another, but at the end of the fight, the victor might hold the slain like a brother and help him reach the corpse-hall, pleading with him to wait for their arrival so they can drink together.

If you haven't picked up Sword Song yet, I highly recommend it.

Anonymous: Thanks a lot! I have read the Warlord Trilogy and it's actually my favorite Cornwell series. Though the Saxon Stories is giving it a run for its money.

Badelaire: I have read Sword Song and I will heartily vouch for that recommendation.

Yeah, the vikings were a unique breed. They had no compuctions about torturing and killing monks, putting villages to the sword, and worse. But nevertheless Cornwell manages to portray (some of) the Danes as sympathetic. I found myself feeling bad for Ubba, for example.